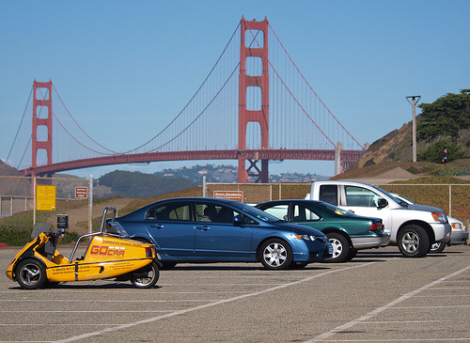 It wasn’t that long ago that an industry trade show in Vegas would be the last place you’d expect to hear about environmentalism and sustainability. That’s changed dramatically… CES is just the largest example of an industry event that’s incorporated green elements in a big way. Last week, Enterprise Holding’s director of corporate sustainability Lee Broughton brought the concept to a very different Vegas-based event: the Car Rental Show.

While we love to discuss greener transportation (both mass and personal) with the sustainability space, the car rental industry could easily be one that’s a bit hesitant to embrace such principles… and the fact that Broughton’s speech (which I’ve read) focused mainly on education and low-hanging fruit for the industry tended to underscore that. Yep… Broughton’s speech led me to assume that Enterprise’s efforts (which we’ve discussed in various posts here) are still relatively unique: if he felt the need to explain the “triple bottom line” fully, or to introduce the notion of the industry as an ecosystem, then I’d guess there are many in the industry still grasping with the basics of sustainability.

That’s OK — we all have to start somewhere — and while Broughton’s speech did focus on things many of us might consider rather basic (alternative fuel cars, including EVs and plug-in hybrids, for instance), he also briefly touched on the place of rental cars in a vastly different transportation ecosystem. Members of his audience may have focused more on incorporating the LEAF in their fleets, or adding carbon offset options, but my reading of the speech got me wondering if Enterprise, as well as transportation and urban planners, see rental cars as a possible “new normal” in our transportation system.

That’s happening to some degree: urban downtowns and college campuses have slowly but steadily embraced the car sharing model as a way to meet resident and student transportation needs while reducing demand for parking and other infrastructure. But what if you combine some kind of car rental model with mass transit? Or, essentially, use the traditional rental car model — using these cars for the “last miles” after air trips — for local and regional land-based transportation? There’s no reason you couldn’t combine monthly transit passes with car sharing program memberships… and make the model even more convenient. There’s also no reason the models offered couldn’t primarily be EVs and/or plug-ins, as the combination of transportation modes would more often than not mean low-mileage trips in the vehicles.

Of course, this would require a much stronger passenger rail infrastructure… and this is an issue to which Broughton spoke. It would likely also require expanded bus service in suburban and exurban areas. But it could also make very conceptual car rental models much more realistic. It’s no wonder that Broughton told his audience “The last thing we need is to compete with public transportation…”

Sure, the forward thinkers in this space are mainly looking at the future of their own industry… but, in this case, that vision could be one that involves a much more sustainable transportation system. It wouldn’t necessarily mean big losses in the auto industry, either: according to Broughton’s speech, there are currently 1.6 million rental cars on the road today. That fleet size would probably need to be expanded somewhat, even with competition from biking and walking options; it would also need to be updated on a regular basis.

I’m largely thinking out loud here, based on some of the idea I picked up from Broughton’s speech… you can get the gist of it from this press release. Please feel free to tell me I’m dreaming… or not dreaming creatively enough.

Looking for other green transportation options? Take a look at all of our bike selections, including electric bikes (some of which fold up for easy use with public transportation).

Image credit: ingridtaylar at Flickr under a Creative Commons license