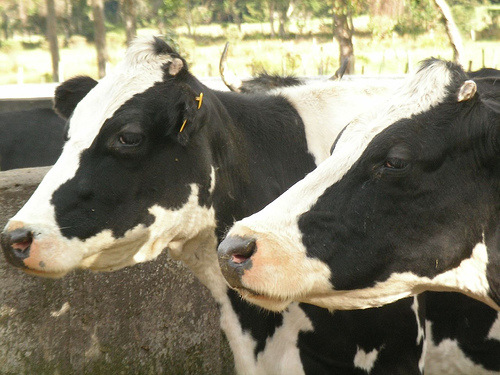 If you watch a movie like Food Inc., you get the impression that most cows spend their lives in huge, crowded feedlots.   That is part of the story, but not an accurate picture of the North American bovine industry.  It turns out that there is a US Census for cows (conducted every five years by the USDA, not the Census Bureau).  This “Census of Agriculture” counts the cows by farm for every county in the US.  It is a more accurate view of what our animal farming system actually entails.

What Does The Data Say about Cattle Ranching?

I used the handy data search tool that USDA-NASS provides and pulled down the data on “Farm Inventory of Cows and Calves.”  The first striking think is that cows are being raised in 3,077 different counties of the US (virtually all of the non-urban counties).  There are also a lot of cows! – 96 million on more than 960,000 different farms.  The next striking thing is that on average there are only ~100 cows per farm.  This means that a great many cows are living much of their life in a pasture rather than in a feedlot or CAFO (confined animal feeding operation).

The map below shows that most areas of the US have farms with relatively few cows while the giant cattle operations are only in certain Western states.

What Does This Have To Do With Sustainability?

Lots.  Many have pointed out that animal protein requires more land/fertilizer/energy/water than plant protein and have argued for less meat in our diets.  The counter-current trend is that as people in the developing world see some economic development, they logically want to eat more meat and dairy.  Meat and dairy, particularly that produced in Confined Animal Feeding Operations (CAFOs), consumes a great deal of the grain crops that are grown in the developed world.  These crops represent a huge part of the US and South American grain going to big, net-importers like the EU, Japan and China.  But what this data shows is that at any given time, many US cows are on rangeland and pasture.  The US also grew 61 million acres of hay on 870,000 farms and much of that went to cattle.  US meat and dairy production are not all about the negative images presented by their critics.  Our meat and milk production isn’t all about grain feeding.

Cows Are Magic (but only because of bacteria)

One great thing about cows (and other ruminants like sheep, yaks…) is that they can eat cellulose, probably the most abundant terrestrial food source.  Humans can’t get any energy out of cellulose because we don’t have the extra stomachs and special bacteria which allow the cows to convert this huge food source into meat/milk.  It is this ability which has allowed herding societies to live off of grasslands for millennia.  The point is that a substantial part of the feed for US cows is still coming from the relatively more sustainable sources of cellulose.

Variations On The CAFO Model

Most of the cows in this census probably ended up being taken off of these smaller farms and “grain finished” in the last months of their lives.  In this situation, cows in large numbers are fed grain-based diets in Confined Animal Feeding Operations (CAFOs).  This is done for efficiency of weight gain and for meat quality.  But not all CAFOs are the same.  For instance, some CAFOs or large dairies put the manure through an anaerobic digester to generate methane as a biofuel for electricity generation or other uses, thus greatly lowering the “carbon footprint” of that meat or milk.

New Finishing Alternatives Are Being Tested

Researchers at the University of Illinois have developed a different system where cows are fed corn earlier in their life while their consumption is lower and then finished on a variety of non-starch feed sources (grass, hay, DDGS, soy hulls…) and yet still achieve the same meat quality.  The total grain demand in that system is lower and that is particularly attractive with today’s high commodity prices.

A group at the USDA has been promoting a “Pasture-finishing” system where corn is made available in feeders out in the pasture so that the cows make their own choice of how much grass and how much grain to eat.  It turns out that the “finishing” process can be every bit as efficient and give good quality meat with much less total grain consumption.  They call this a “grain-on-grass” system and it can be more profitable for the farmer because of lower grain expense.  If it catches on, there will be even more cows “let out.”

I would like to see labeling of meat produced in some of these lower grain systems because it could be a moderate cost alternative to purist alternatives like “range-fed.”

You are invited to comment here or to email me at feedback.sdsavage@gmail.com.  You can see my other posts at Applied Mythology.

Want to just avoid meat in your diet? Take a look at our selection of vegan cookbooks, and meat and dairy substitutes.