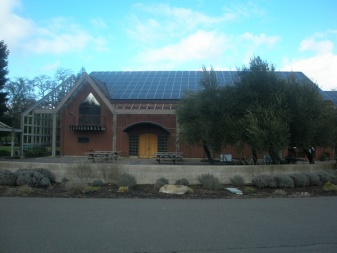 Last week as we overnighted in the LEED Gold Gaia Hotel in American Valley, we thought that we should take advantage of what everyone else in the region does – wine tasting. But we figured to be a little different. We hit a few wineries of varying organic, green, sustainable qualities and found a few surprises. First, get it out your head to tie “sustainability” to traditional wine making. As Winemaker Steven Canter at Quivira mentions, “There’s nothing sustainable about bottling wine in a glass bottle, corking the bottle, then shipping it all over the country.”

We scooted into the Madonna Winery tasting room during a quite Sunday afternoon. Located in the Carneros Region of Napa Valley, this family produced wine believes in organic farming, without the use of synthetic chemicals and is a proud member of CCOF (California Certified Organic Farmers). But when we asked the two servers if they served organic wine it was as if we asked for a tasting of Miller Lite. One gave this look of confusion and the other got a little condescending. Apparently, they do not make organic wine. According to the servers, that whole organic wine issue deals with the adding of sulfites and they think that serious winemakers have to use sulfites. Everyone gets to do their own due diligence as far as organic this or that but don’t make us feel like idiots for bringing up the question.

Up at St. Helena based Duckhorn, the much more hospitable Jeff Roberts and Shannon Donnell (their Director of Vineyard Operations and their sustainability expert) took us through the vineyards and showed a real interest in creating not only good wines but doing so responsibly. They show a real concern for the environment with utilizing techniques and practices for the long term benefit. Both belong to the Napa Sustainable Winegrowing Group, which help to identify and promote winegrowing practices that are socially responsible, economically viable and environmentally sound. As part of their social justice, Roberts oversees their in-house farming crew, (not seasonal laborers) which include seven full-time and three part-time employees. Although they aren’t fully organic they continue to move in that direction. They even mentioned that about 75 percent of the Napa Valley wineries operate in some sustainable manner or it’s at least on their radar. The other 25 percent continue to operate in the old school conventional grape growing.

After a few pointers, it became easier to see what wineries grew organic just by looking at the vineyards. Any vineyard that’s finely manicured, without a weed in site, most likely uses an all-spray mentality straight from the 80’s conventional farming. It’s okay to have vineyards a little rough around the edges. In fact, “wine farming” continues to gain more recognition with growers more concerned with winemaking and vice versa.

Continuing our organical mystery tour, we rode up to the Healdsburg region to Quivira Vineyards & Winery in Sonoma County’s Dry Creek Valley. We didn’t have too much trouble spotting it, with the solar panels that adorned the roof. But this place represents much more than solar and organic. Although they do grow organic grapes they also create biodynamic wine (or what winemaker Steven Canter calls “organic plus”). At first, biodynamics seemed like a bunch of hokum but after talking with Canter and seeing the goats and chickens as well the lions, and tigers and bears (!) we began to alter our thinking. Being certified biodynamic involves a laundry list of protocol and full moon regulations but to us the concept seems like working with Mother Nature instead of dealing with Father Chemical. Their responsible philosophy extends to water savings. Located at the confluence of Wine Creek and Dry Creek, the winery has been grandfathered in to use as much water as they want. But not here, they recently purchased an expensive steamer to clean barrels that saves thousands of gallons of water each year. Overall, they’ve created an environment that actually gives back to the river and land.

Sure we swallowed the Kool-Aid, but we’re big fans of the Petite Sirah too.