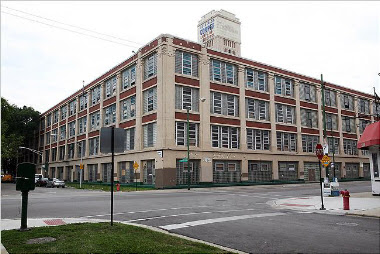 The green blogosphere has been buzzing for some time now with news about the planned Chicago Green Exchange, a 250,000-square-foot loft building in the Logan Square neighborhood. When opened (the developers are shooting for September 2008), the Exchange will be a truly unique space: part shopping mall, part business incubator, and part office complex, all with a green focus. According to today’s New York Times, the project is not only attracting attention from us greenies on the web, but also the Chicago business community:

The owner and builder, Baum Development, says it already has commitments for nearly 30 of the 100 Green Exchange spaces. The prospective tenants include an electric vehicle dealer, a green building supply company and a treeless paper packaging company. The rents are expected to be $18 to $35 a square foot annually, in line with market rates for the area.

About 20 percent of the business spaces at Green Exchange have been designed so that the tenants can build a bathroom and small kitchen, enabling them to live there.

The novel commercial real estate project is part of the expansion of environmentally oriented investments and policies that are reshaping Chicago’s economy: office buildings with green roofs, a city-built incubator for green businesses, fleets of ultraclean buses and municipal electric vehicles.

The renovation of the former Frederick Cooper Lamp factory incorporates a range of green building practices, and the finished building will showcase features such as escalators that use 30% less energy than their conventional counterparts (they’ll slow down when no one’s on them), and parking spaces with outlets to recharge electric vehicles. Furthermore, the criteria for obtaining retail space includes a “green” clause, according to developer David Baum: “In order to be a tenant in Green Exchange, you must be doing something to advance the green marketplace.”

When complete, the price tag for the complex will likely run around $40 million. That’s sizable, but Chicago’s green business community is already thriving with generous support from the city government and Mayor Daly. I’ve made three trip to the Windy City in the last year, and continue to be impressed: both the the public and private sectors seem totally committed to making Chicago a model of urban sustainable (re)development. Kudos!