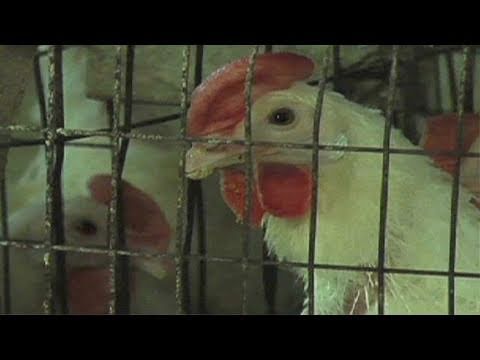 On July 7, 2011, a press release went out announcing a seemingly significant victory in the effort to improve the conditions of egg-laying chickens. The Humane Society of the United States (HSUS) had reached an agreement with the United Egg Producers (UEP), which, its website states, “is a trade association representing the majority of U.S. egg farmers who sell about 90 percent of all the eggs developed in the U.S.” The settlement called for adding a number of federal regulations to how chickens are treated in egg-production facilities…over the course of the next 15-18 years.

Although any improvement in the conditions animals must endure should be taken as a positive development, the agreement does still leave a lot to be desired–such as lack of strong accountability and enforcement measures, a glacial pace of adoption, and a new system that still limits the animals’ natural behaviors…not to mention keeping them as commodities in the food-production assembly line.

The Current State of Chicken Welfare in Egg Farms

The issue is significant for chickens especially (amongst all farmed animals) because of the number of the animals affected: each year,  American egg facilities house nearly 280 million hens, the vast majority of which are stuffed into wire “battery” cages like clothes into a suitcase. Then, on top of this insult to living creatures, they are usually fed antibiotics, exposed to lighting and food manipulation, and left untreated when they get sick; their natural instincts, such as pecking, scratching, and flapping their wings, are all entirely thwarted, despite clear scientific proof of the harm this treatment causes. But in the name of efficiency and production, these practices are acceptable.

So, many people would and could count just about any improvements in the regulation of egg-laying hens as a victory, since at present neither the Animal Welfare Act or the Humane Methods of Slaughter Act cover chickens. (The former does not even cover farmed animals at all.) Quite a revolution, right?

Where was the Media on this Major Agreement?

And yet for all its significance,  this is one agricultural “revolution” you probably have not even heard of. It seems to be at best a blip on the radar, receiving the obligatory coverage in outlets such as the New York Times and Associated Press, for example. While most news outlets cover every aspect of the budget deficit, the presidential campaign, the News of the World implosion, the wars in the Middle East, and so on ad nauseum, very little mainstream air (or web) time was given to this major story in the larger sad epic of farmed animals. Our news purveyors ignored an opportunity to explore in depth the realities of chickens and other farmed animals, to explore the pros and cons of this agreement, to help raise the awareness of consumers about these battered creatures.

Whatever the reason, this oversight by the media is sad because it reveals a systemic lack of awareness–one might justly say apathy–when it comes to the plight of factory farmed animals. It also makes clearer why measures to move away from factory farming such as this are so difficult, given the lack of attention they (and the subject as a whole) receive in the press.

Given this culture of willful ignorance, it becomes even more of an ethical imperative for consumers to be conscientious whenever they do choose to use animal products, carefully scrutinizing the labels and researching the claims made on those labels, to ensure that products are ethically produced. If you can shop at a local farmers market and/or buy directly from a producer of ethically raised animal products, you can have much more certainty that those products are truly the results of humane farming practices.

Of course, the only genuine solution to reducing farmed animal cruelty as much as possible is to reduce or give up entirely the use of animal products; by going all the way and going vegan, you take perhaps the biggest step towards avoiding unnecessary suffering and death of our animal friends. Although we cannot avoid death and suffering in this world, being vegan means you are trying your best to avoid unnecessary harm to other animals. And a more compassionate world is definitely something that is newsworthy.