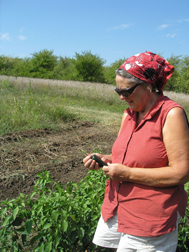 Quick trivia question: What’s the second verse to “The Farmer in the Dell”? Anybody? Here you go:

Talk about stale lyrics in dire need of an update. As women make up the largest and fastest growing group buying new farms today, we should be teaching kids something more like:

“The wife took over the farm.
To the land she did no harm,
Hi-ho, times change, you know, These chicks can really grow.”

Consider Iowa farmer, Denise O’Brien, chief song lyric rewriter and female farmer stereotype smasher extraordinaire. For the past twenty years she has led the charge of organizing and promoting the voice and face of women in agriculture and is founder of the Women, Food and Agriculture Network. “Finally, the tides are starting to turn for women farmers as policies start to change,” explains O’Brien. “But it should have happened a long time ago and there’s still much we as women, from growers to grocery shoppers, can do to create a healthy food system for future generations.”

O’Brien racks up a history of seeing opportunity in crisis. Her agriculture advocacy work started back during the farming crisis of the 1980s when many family farms collapsed and were forced into foreclosure. “It was the women on the farms who saw this economic gloom on the horizon as they often kept the accounting books and could see were things were heading long term,” O’Brien recalls. “But the problem was these women still often considered themselves ‘just farm wives’ and no one took their voice seriously. We women needed to get out of the role of just making coffee at meetings.”

This launched O’Brien on the road of agriculture activism, balancing multiple roles of helping run her family’s diversified dairy and produce farm, Rolling Acres, raising children and serving as a national advocate and spokeswoman for women in agriculture. “I realized during that farm crisis of the 1980s that if I didn’t step to the plate to organize women, if I didn’t instigate something, perhaps no one would,” adds O’Brien. In 1997 she launched the Women, Food and Agriculture Network to help women farmers develop the organizational and speaking skills to collectively advocate for a stronger voice and representation.

You don’t need to be a farmer to support women in agriculture. “Whatever your background, there’s a role each of us women can play to support a healthy, green and fair food system,” O’Brien explains.

Here are some steps to get started:

1. Connect with Kindred Spirits
Start coalition building by connecting with others in your community who share your healthy food values. O’Brien first met many of her local tribe of kindred spirits through starting a food co-op, drawing people together with a desire to purchase natural foods not available in their rural area. “Turns out we were all kindred spirits on other levels as well, such as politics and organic gardening,” adds O’Brien.

2. Be Available
Make yourself available to attend meetings, particularly those that are traditionally dominated by men such as local planning and farm service meetings. When her children were young, O’Brien would often attend meetings with her kids in tow: “I wanted my kids to grow up realizing the importance of being involved and active with the issues you consider important.”

3. Support Other Women
Supporting other women goes beyond mentoring. “Women need to be each other’s cheerleaders,” O’Brien explains. “Give words of encouragement, show up at meeting and events, create connections and grow networks between women.”

4. Join Advocacy Groups
Agriculture groups like the Women, Food & Agriculture Network and the Sustainable Agriculture Coalition synthesize key farming issues, making it easier for you to take action on food and agriculture policy, such as writing letters to representatives.“