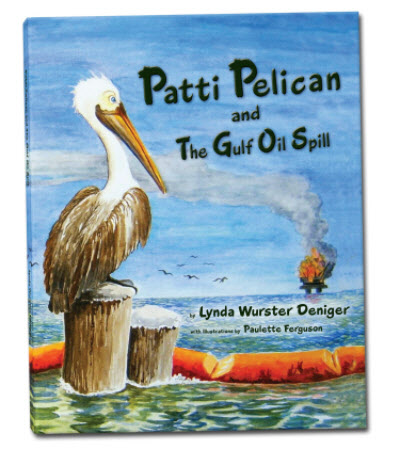 Author’s note: Publisher HIS Publishing Co. sent me a free review copy of Patti Pelican and the Gulf Oil Spill.

Unless you went on a media fast yesterday, you likely came across acknowledgements of the one-year anniversary of the BP oil spill. Many online outlets — among them Crisp Green and HuffPo Green — ran photo galleries from the disaster in the Gulf; many of these images are still hard to look at even a year later.

If you’ve got young children at home, you may find that they have extra difficulty with photos from the event… especially those portraying animals. No doubt pictures of oil-soaked pelicans and sea turtles hit them hard, even if they can’t necessarily wrap their heads around the totality of a disaster like this (and, of course, we adults have issues with this, also).

Louisiana author Lynda Deniger already had one children’s book about coastal life in the Bayou State under her belt when the Deepwater Horizon blew last year, and saw the characters she’d already created — shrimp boat Salty Seas and her owner Captain Charley, Patti Pelican, and Sammy Seagull — as mediums through which she could help explain the impact of the spill on Gulf wildlife. Her newest book for little ones, Patti Pelican and the Gulf Oil Spill, aims to put the event into a perspective a child can understand, and to show kids the efforts made by shrimpers and fisherman, as well as wildlife rescue workers, to protect both humans and animals from the worst effects of the spill.

Though the book doesn’t go into the deaths of rig workers, or even those of many coastal animals, Deniger does present the spill as something life-changing for its characters. Both Sammy Seagull and Patti Pelican end up coated in oil and unable to move; through the efforts of Captain Charley and animal rescue workers, the two birds are saved. Deniger details the process of taking care of the animals in a manner a child could comprehend… and lets her young audience know that good people are at work trying to help them. She achieves a very appropriate balance between conveying the horror of the event (without making it horrific for a child), and also demonstrating that people are working to control the damage, and return the area to some sense of normalcy.

Like any good children’s book, Patti Pelican and the Gulf Oil Spill pairs the story with plenty of visual elements. Illustrator Paulette Vinyard Ferguson creates vivid images that show the damage done to the birds… but, like the story, in a manner that children should be able to handle. She also captures the beauty of the region, even at one of its ugliest moments.

If you have young children, you’ve no doubt tried to shield them from the more brutal elements of this tragedy… but, no doubt, kids have heard and seen about the oil spill, and (just like the rest of us) tried to make sense of it.  Deniger’s book helps them understand elements of the spill that probably resonate the most with them… and gives them a sense of hope that there are adults out there ready to protect them, and the animals they love, from such threats. A two-page epilogue discusses some of the efforts kids themselves have made to help with the effects of the spill, such as four-year old New Orleanian Jonathan Bush’s “Pelican Aid Lemonade” stand, or a Baton Rouge eleven-year-old’s work to raise money by designing and selling t-shirts. Kids may not only feel safe after this story, but even empowered to help.

Adults are still grappling with the oil spill and its aftermath… no doubt, kids are, too, in their own way. Lynda Deniger’s book provides a meaningful tool for helping them cope with this disaster.

Read this book to your kids, or others like it that address environmental challenges in a manner that educates them without scaring them? Let us know about them…

Update: Want to Win a Free Copy of Pelican Patti and the Gulf Oil Spill?

I don’t have young children at home, or know anyone who does (or, at least, anybody who’s kids are at the right age for this book… late pre-school to early elementary school), so I’m going to give away the review copy the publishing company sent me. Want to enter? Go to our sustainablog community, and write a review, or offer a quick tip on any work of children’s literature with an environmental theme (yep, that includes The Lorax… or even Pelican Patti). Once you’ve written your content, tag it with pelicanpatti (along with other relevant tags). Get your review or tip in by midnight (CST) on Friday, April 29th, 2011 to enter the drawing.

Got questions? Let me know…

Get your kids ready for Summer with our collection of organic clothing just for them… including shorts, t-shirts, and jeans.