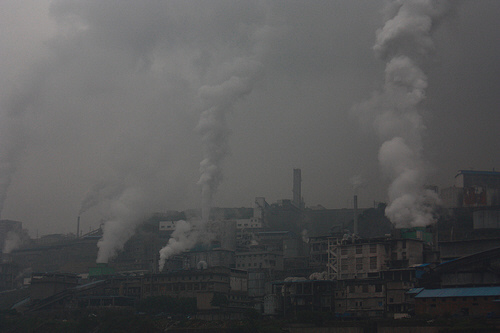 Cancer is now the leading cause of death in China. Chinese Ministry of Health data implicate cancer in close to a quarter of all deaths countrywide. As is common with many countries as they industrialize, the usual plagues of poverty — infectious diseases and high infant mortality — have given way to diseases more often associated with affluence, such as heart disease, stroke, and cancer.

While this might be expected in China’s richer cities, where bicycles are fast being traded in for cars and meat consumption is climbing, it also holds true in rural areas. In fact, reports from the countryside reveal a dangerous epidemic of “cancer villages” linked to pollution from some of the very industries propelling China’s explosive economy. By pursuing economic growth above all else, China is sacrificing the health of its people, ultimately risking future prosperity.

Lung cancer is the most common cancer in China. Deaths from this typically fatal disease have shot up nearly fivefold since the 1970s. In China’s rapidly growing cities, like Shanghai and Beijing, where particulates in the air are often four times higher than in New York City, nearly 30 percent of cancer deaths are from lung cancer. (See data at www.earth-policy.org.)

Dirty air is associated with not only a number of cancers, but also heart disease, stroke, and respiratory disease, which together account for over 80 percent of deaths countrywide. According to the Chinese Centre for Disease Control and Prevention, the burning of coal is responsible for 70 percent of the emissions of soot that clouds out the sun in so much of China; 85 percent of sulfur dioxide, which causes acid rain and smog; and 67 percent of nitrogen oxide, a precursor to harmful ground level ozone. Coal burning is also a major emitter of carcinogens and mercury, a potent neurotoxin. Coal ash, which contains radioactive material and heavy metals, including chromium, arsenic, lead, cadmium, and mercury, is China’s number one source of solid industrial waste. The toxic ash that is not otherwise used in infrastructure or manufacturing is stored in impoundments, where it can be caught by air currents or leach contaminants into the groundwater.

Coal pollution combined with emissions from China’s burgeoning industries and the exhaust of a fast-growing national vehicle fleet are plenty enough to impair breathing and jeopardize health. But that does not stop over half the men in China from smoking tobacco. Smoking is far less common among women; less than 3 percent light up. Still, about 1 in 10 of the estimated 1 million Chinese who die from smoking-related diseases each year are exposed to carcinogenic second hand smoke but do not smoke themselves.

In rural areas, liver, lung, and stomach cancers each accounts for close to 20 percent of cancer mortality. Liver cancer is more than three times as likely to kill a Chinese farmer as the average global citizen; for stomach cancer, rural Chinese have double the world death rate. These cancers are linked to water polluted by chemicals and sewage, along with other environmental contaminants.

As factories, plants, and mines discharge pollutants, rivers and lakes take on sickly hues. Even underground water sources become contaminated. Government data indicate that half of China’s rivers and more than three out of every four lakes and reservoirs are too polluted for safe drinking, even after treatment. Nevertheless, they remain a primary source of water for many people.

More than 450 “cancer villages” have emerged across China in recent years, according to an analysis by geographer Lee Liu published in Environment magazine in 2010. These communities — where an unusually high number of residents are struck by the same types of cancer — tend to cluster in poorer areas along polluted waterways or downstream from industrial parks. Whereas much of China’s early industrial development took place along the coast, factories more recently have been locating where labor is cheaper and environmental oversight is less strict, pushing the so-called “cancer belt” inland.

For villages once largely self-sufficient, the poisoning of their water and soil is devastating. The young and able-bodied often leave to seek income elsewhere. Those too old, too poor, or too sick to leave remain, struggling to work the poisoned land.

Liu notes that in some extreme cases, like in Huangmengying Village in Henan Province, “the death rate is higher than the birth rate and is rising rapidly,” and not because of population aging. In this particular village, which gets blackened water from a tributary of the notoriously polluted Huai River, some 80 percent of the village’s young people are chronically ill. Even one-year-olds are receiving cancer diagnoses. About half of all the village deaths between 1994 and 2004 were caused by liver, rectum, and stomach cancers. More recent data is not readily available because the government official who initially made the numbers public was accused of “leaking state secrets,” was fired from his job as the village’s Party secretary, and now is reluctant to speak out, according to reporting for the Global Times.

Because of the lag time before diagnosis or death, plus the lack of health care in many of the poorest, most polluted areas, the magnitude of China’s cancer epidemic could be far greater than imagined. And not all the environmental burden is borne locally. The contamination spans geography — as toxins in products and crops are spread through markets and trade or are literally carried across oceans by global air currents — as well as generations.

China’s youth, and therefore the country’s future, are at risk. Birth defect rates have been climbing rapidly in recent years in the major cities and countrywide. Chinese family planning officials link this “alarming rise” to environmental contamination. The coal mining and processing areas of Shanxi Province are home to the world’s highest birth defect rate: over 8.4 percent. Of the 1 million or so affected babies born each year in China, some 20 to 30 percent may be treated, but 40 percent will have permanent disabilities. The rest die shortly after birth.

Over the last several years, thousands of children living near lead mines, smelters, and battery plants have been poisoned. Deadly at excessive levels, lead in the blood is considered unsafe in any amount. Exposure can impair cognitive and nervous system development, stunt growth, hamper learning, and depress IQ. Heartbreaking news stories tell of the lost potential of children who lose their chance to go on to school or fail to thrive more generally due to their exposure to high environmental levels of lead.

For a country of one child families, it is no wonder to see more frequent “mass incidents” (the government’s term for protests) sparked by the health fallout from pollution. In some cases, operations of the offending industries have been closed following protest; in others, the government has relocated entire communities to allow the polluters to continue operations. Yet in many situations, the contamination continues unabated.

It is easy to point a finger at unscrupulous industries and government officials willing to look the other way, but some responsibility for China’s unhealthy environment originates outside the country’s borders. Waste is frequently loaded up in container ships overseas and delivered directly to China. More insidiously, Western consumers lapping up artificially cheap “made in China” components and products have outsourced pollution to this factory for the world.

Earlier this year near the release of China’s latest 5-year plan, the New York Times quoted Chinese Prime Minister Wen Jiabao’s proclamation that “We must not any longer sacrifice the environment for the sake of rapid growth and reckless roll-outs.” Yet while official rhetoric recognizes the importance of preserving the environment and the health of its people, the Chinese government still has a long way to go in bolstering transparency and enforcement of even the existing environmental regulations, not to mention strengthening protection. If it does not do so, the country’s toxic burden threatens to stall or even reverse the dramatic health gains of the last 60 years, which raised average life expectancy from 45 to 74 years and slashed infant mortality from 122 deaths per 1,000 births down to 20. Economic gains could be lost as productivity wanes and massive health bills come due. Ultimately, a sick country can prosper only so long.

Janet Larsen is the Director of Research for the Earth Policy Institute. Additional resources at www.earth-policy.org.