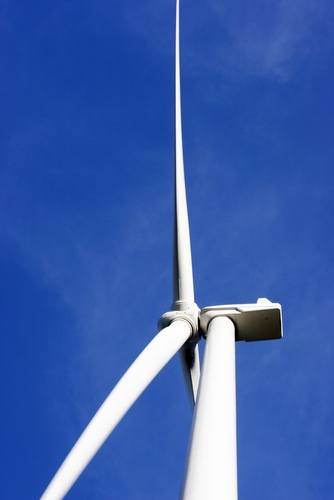 Everything we hear about China seems to be BIG. Big numbers of people, big numbers of cars, pollution, quantity of food, and so on. Now, a new report out by the Worldwatch Institute says that China is going big in another way: renewable energy.

Powering China’s Development: The Role of Renewable Energy finds that China will likely achieve its target of getting 15 percent of its energy from renewable sources by 2020 and perhaps even 30 percent by 2050. Compare that to the U.S., which is working towards 7.5 percent renewables by 2013.

The report sites supportive government policies and a strong manufacturing base that will allow the nation to leapfrog so many other clean energy leaders, including the European Union.

Despite all the buzz about hot Chinese solar companies, wind power is actually the fastest growing renewable energy. The government spent $2 billion USD on wind last year and doubled capacity. Eric Martinot, one of the authors of the report, explained to BusinessWeek:

Indeed, the world’s largest wind company, Vestas, has increased its China staff from 50 employees two years ago to more than 1,000 today. But it’s not just international companies setting up shop in this burgeoning market: a Chinese company called Goldwind Science & Technology has the largest market share in wind power.

Companies of all sizes and from all nations will be needed to fight the backlog of turbines: While some European manufacturers are delayed until 2012, turbines from China may be supplying wind farms in places like California, Montana, and New Mexico.

If the good news is a continuing, healthy Chinese clean energy market, the bad news is that the coal plants planned for China loom large. In fact, according to the International Energy Agency, all the renewable energy in China thus far will not be enough to negate the runaway coal emissions. Until both hands start working together, the end result of global warming continues to be a big problem.