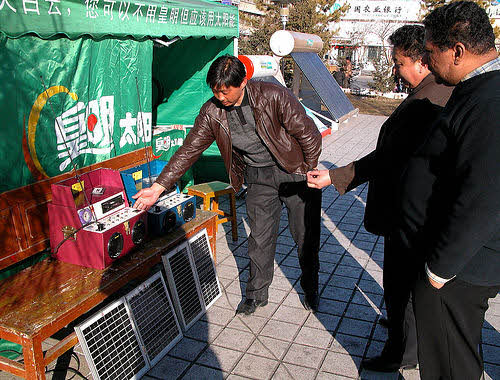 In the last two years, countries around the world have added almost as much new solar photovoltaics (PV) capacity as had been added since the invention of the solar cell. Nearly 38,000 megawatts of PV came online in 2013, a new annual record. In all, the world’s installed PV generating capacity is now close to 140,000 megawatts—enough to power each home in Germany. Falling costs and effective policies continue to drive tremendous growth in solar power. Solar cells consist of semiconductor materials—typically crystalline silicon—that convert sunlight directly into electricity. Made up of many cells, solar panels can be linked together into any number of system sizes, from multi-kilowatt residential rooftop systems to massive ground-mounted arrays measured in hundreds or thousands of megawatts.

China—the leading manufacturer of PV—had until recently installed very little solar power at home. Those days are over. Between 2010 and 2012, China’s PV capacity grew nearly ninefold to 7,000 megawatts. Then in 2013, China added at least 11,300 megawatts, the largest PV addition by any country in a single year. With 18,300 megawatts, China now trails only Germany (at 36,000 megawatts) in overall capacity. (See data.)

More than half of China’s new PV in 2013 was installed in the western provinces of Gansu, Xinjiang, and Qinghai, far from population centers. A 320-megawatt PV project—the world’s largest—was completed in late 2013 alongside the Longyangxia hydropower dam in Qinghai. As large project development in remote areas continues, China is also looking to increase the number of small systems that do not require long-distance electricity transmission, aiming for more than 8,000 megawatts of rooftop PV in 2014. It appears that China will soon lead the world in solar power as it does in wind: in May 2014, the government announced a PV target of 70,000 megawatts by 2017. To the east, Japan installed the second-most PV in 2013, adding 6,900 megawatts to reach 13,600 megawatts of solar power in operation. The main driver of this doubling was a generous feed-in tariff (FIT) introduced a year after the 2011 Fukushima nuclear disaster to promote renewable energy development. (In general, a FIT guarantees generators a certain price over a fixed term for the electricity they send to the grid. Most of the world’s PV development to date has been catalyzed by FITs.)

Small rooftop systems still dominate Japan’s PV landscape, but 2013 marked the first year when most new capacity came from larger projects. In early 2014, an 82-megawatt park—Japan’s largest—opened in Oita Prefecture. And in June 2014, Kyocera and four other companies agreed on plans for a 430-megawatt project on farmland in the Goto Islands off Nagasaki Prefecture in Kyushu, Japan’s third-largest island. Solar panels will be mounted on stilts, allowing enough sunlight to pass through to crops. The electricity produced, capable of powering 140,000 homes, will be delivered by undersea cable to Kyushu. As PV development accelerates, Japan is fast approaching its 2020 target of 28,000 megawatts.

India nearly doubled its PV capacity in 2013. The western desert states of Gujarat and Rajasthan contain more than half of the country’s 2,300 megawatts of PV. In June 2014, shortly after his election as prime minister, Narendra Modi’s administration announced an expansion of the National Solar Mission goals for 2022—from 22,000 to 34,000 megawatts—in order to generate 3 percent of the country’s electricity from solar power. The solar consultancy Bridge to India notes that PV sited on just 6,200 square miles, about 0.5 percent of India’s land area, could generate 50 percent more electricity than India currently uses.

Of course, 300 million Indians still lack access to electricity, while hundreds of millions more experience frequent shortages due to an unreliable grid. The good news is that installing rooftop PV in rural areas is cheaper than building a central power plant and grid, and electricity from PV is now cheaper than that from diesel generators. In addition, in a country where irrigation pumps running on diesel or grid electricity chronically overdraw underground aquifers, solar power offers a solution. A new government program will help farmers buy solar-powered pumps if they switch to water-saving drip irrigation. This is a triple-win: water use drops without affecting yields, fossil fuel use declines, and the government saves up to $6 billion per year in diesel and electricity subsidies.

Elsewhere in Asia, South Korea grew its PV capacity 40 percent to nearly 1,500 megawatts in 2013. And Thailand expanded its Lopburi Solar Farm to 84 megawatts, part of an 80 percent boost in national solar installations to 700 megawatts.

Solar Power in Europe and the Americas

With its 2013 PV boom, Asia unseated Europe to become the leading region in annual installations. Downward adjustments to renewable energy incentives in Europe slashed new PV installations there by more than one third. Germany reduced its FIT rates for new projects faster than planned in an attempt to save on payments, and that cut installation rates in half.

Reining in solar incentives has also slowed PV installations in Italy, now the third-ranked country in overall capacity with 17,600 megawatts. FIT rates for new PV plants were reduced beginning in mid-2011 and eventually eliminated in mid-2013. But PV system costs in Italy have fallen by 56–70 percent over the last five years, depending on size, a positive sign for PV competitiveness after the FIT. A recently-finished 700-kilowatt rooftop system on an Ikea store in Pisa, one of the first unsubsidized projects, will generate electricity at a price that rivals or bests the grid average.

Across the Atlantic, solar power is starting to take off in the United States. The country added some 4,800 megawatts in 2013, increasing its total PV capacity by 65 percent to 12,000 megawatts. Factors contributing to this growth include continually falling system costs (2013 saw an average 15 percent drop), utilities meeting state-mandated obligations to sell electricity from renewables, and home solar leasing arrangements gaining in popularity.

More than half of the new U.S. PV capacity in 2013 came online in California, long the leading solar state. In addition to small residential systems, many large solar parks are operating or under construction in California, including the two Solar Star projects slated for completion in late 2015. With a combined 580 megawatts, these two plants are expected to generate enough electricity for 250,000 homes. Arizona, which added 420 megawatts of PV in 2013, boasts the 290-megawatt Agua Caliente project outside Phoenix. Rounding out the top five states in 2013 were North Carolina (340 megawatts), New Jersey, and Massachusetts (240 megawatts each).

Another sunbaked country building its PV capacity is Australia, now with 3,300 megawatts. One in seven homes there generates electricity with rooftop PV. In South Australia, the figure is one in four homes.

In the Middle East, Israel has installed the most solar PV to date. Its installed PV base grew 75 percent in 2013 to 420 megawatts. Dubai in the United Arab Emirates switched on a 13-megawatt project in October 2013 that is planned to expand to at least 100 megawatts and perhaps 10 times that size. By 2032, Saudi Arabia aims to have 16,000 megawatts of PV.

In Africa, where small off-grid PV systems have been the norm, South Africa dominates in PV capacity. At least three large projects with a combined 175 megawatts have been inaugurated in that country’s Northern Cape province since late 2013. The Chinese solar firm Hanergy plans to build a 400-megawatt park in Ghana. And Skypower FAS Energy, a Canadian-Saudi joint venture, signed agreements with Nigerian federal and state governments in May 2014 to install 3,000 megawatts of utility-scale PV there by 2019.

PV remains the most rapidly growing energy technology by a wide margin. Indeed, global PV installations for 2014 should reach at least 40,000 megawatts, expanding world PV capacity by another 30 percent. As concerns about climate change grow, solar PV has firmly established itself as an integral player in the transition from fossil fuels.

For a plan to stabilize the Earth’s climate, see “Time for Plan B.” Data and additional resources at www.earth-policy.org.