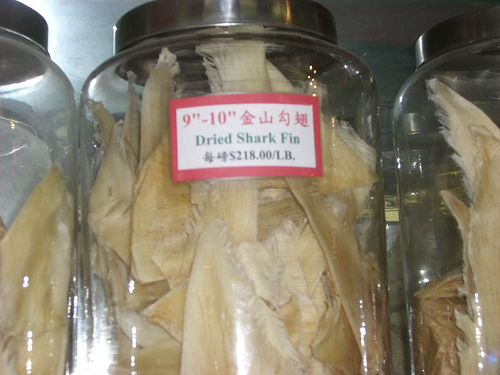 Earlier this week, the City of Toronto became the latest major metropolitan area to ban the sale and possession of shark fins. The ban was passed by the city council by a vote of 38-4.

Fins from up to 73 million sharks are used every year to make shark fin soup, a delicacy in Asian culture.  Shark finning is a cruel and wasteful practice – captured at sea and hauled on deck, the sharks are often still alive while their fins are sliced off. Because shark meat is not considered as valuable as the fins, the maimed animals are tossed overboard to drown or bleed to death.

The state of California, which has a large Asian population, also recently passed a similar ban on shark fins. The California bill was proposed and championed by Assemblymember  Paul Fong (D-Cupertino), who is himself of Asian descent.

“It is time to stop serving a soup that is driving sharks to extinction,” said Assemblymember Fong in September. ”The cultural issue is very minor compared to the major environmental devastation of eliminating sharks for our world’s oceans. Chinese Americans are environmentally conscious, we believe in harmony with nature, it is in our culture to support the protection of our environment.

The Toronto bill was introduced by Councillors Glenn De Baeremaker, John Parker, and Kristyn Wong-Tam, with additional support from Licensing Committee Chair Cesar Palacio and other members of Council. As the fifth largest city in North America, the City of Toronto was the largest market for shark fins in all of Canada.

“Toronto’s action is a huge victory in the global fight against an illegal shark fin trade valued in the hundreds of millions of dollars,” said Rob Sinclair, Executive Director of WildAid Canada, who has been at the forefront of this campaign for the past five months.

The International Union for Conservation of Nature (IUCN) estimates that 1/3 of the world’s shark species are threatened with extinction, with certain species experiencing declines up to 90 percent.

While the practice of shark finning is illegal in North America, current laws banning shark finning do not address the issue of the shark fin trade.  Therefore, fins are being imported into North America from countries with few or even no shark protections in place.