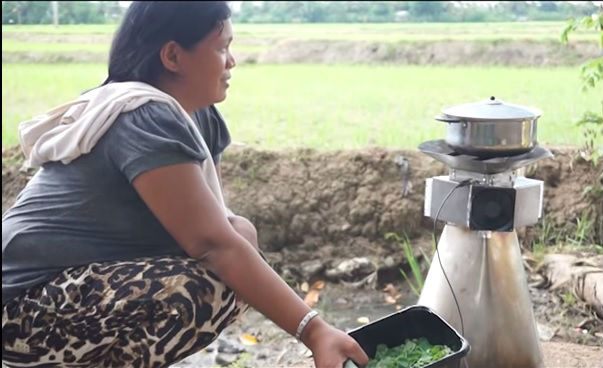 I’m still fascinated by clean cooking technology for the world’s poor, as cooking kills in the developing world – more people die for respiratory diseases brought on by cooking smoke than from HIV/AIDS or malaria. We’ve taken a look at a number of technologies that address this issue, most based on the rocket stove concept. A few had added goodies, like electrical generation. But the K2 concept from start-up Energant takes the concept to yet another level by accounting for the burning of plastic waste in its design.

I did not know this, but people in the developing world don’t just burn a lot of wood and charcoal – they also use cooking fires as a form of waste disposal. At the very least, plastics get used frequently as fire starters… and, as you’ve already guessed, that adds all sorts of nastiness to that already-harmful cooking smoke. Energant’s founder discovered this when testing their first-generation stove, the KleanCook, in the Philippines. The team went back to the drawing board with this knowledge, and developed the K2 to still burn cleanly when up to 8% of the fuel mix consists of plastics. Take a look at the company’s overview of the stove:

Like many of these technologies, developing world economics also play into the design: the team chose materials based on costs of production in poor areas of the world so the K2 could serve economic needs, too. After figuring out that the costs wouldn’t work in the Philippines, Energant has set its sights on the Chinese market, where the government supports the development of such appropriate technologies.

The Chinese government requires additional rounds of testing, so Energant is running an Indiegogo campaign to fund it. Take a look at the video above, plus the plethora of good material on the campaign page – if you like what you see consider helping them take the K2 one more step towards the market.

Know of other social enterprises taking the next step – whatever it may be – in clean cook stove technology? Let us know about them…