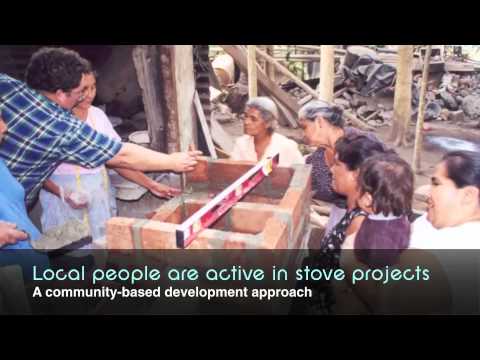 Cooking kills. That’s such a tough statement for those of us in the developed world to wrap our heads around, but, as the video above points out, billions of people in developing countries are still cooking food on inefficient indoor wood or charcoal stoves. The regular breathing of cooking smoke kills millions women and children regularly; the use of wood and charcoal fuel also leads to deforestation and the many environmental & economic problems associated with it.

We can’t ask people to stop cooking, of course; a number of non-profits organizations and social enterprises, though, are exploring ways to do it better. These organizations are developing new, appropriate technologies that address the multiple challenges presented by so many having to cook with rudimentary tools. They’re creating these technologies with the people affected, ensuring that they work for them. And they’re putting together economic opportunities by creating the infrastructure to manufacture, distribute, and sell these products. Here are a handful of the groups doing this important work around the world.

One of the newest ventures on this front, this two-year old social venture in Maputo, Mozambique, not only sells ethanol burning cookstoves to locals (with whom they’ve proven immensely popular), but also has created a direct sales model for local entrepreneurs, and is building an ethanol plant (which will make the fuel from locally-grown cassava). Take a look at the video below for more insight into their work; for deeper detail, check out Jen Boynton’s on-the-ground analysis at Triplepundit.

We’ve discussed this low-tech slow-cooking technology before: it’s essentially a heat retention bag in which a pot can be placed after food’s been brought to boiling. Our friends over at Ecopreneurist have shown how the company selling the Wonderbag has leveraged a number of business opportunities in order to make this fuel saver widely available and very attractive to consumers in both the developed and developing world. They’ve introduced a TOMS shoes-like “buy one, give one” model, for instance, and also sought (and received) carbon credit certification as a Clean Development Mechanism (CDM) project.

Like CleanStar, Trees, Water & People focuses on a range of clean development projects in various parts of the developing world.  As such, they understand that cooking isn’t a one-size-fits-all endeavor, and so one kind of clean cook stove can’t meet the needs of everyone. They’ve developed a number of stove models that make use of locally available materials, draw on local skills for manufacturing, and serve the local culture’s culinary traditions. Take a look at the stove they developed for use in Haiti:

The Paradigm Project, a for-profit effort aiming to put clean wood burning rocket stoves in the hands of millions of families around the world, definitely has the media savvy thing down. I first discovered their work after they launched their Stoveman web video series; since then, they’ve also produced a short film about their work, and even held their own small film festival (alongside the Sundance Film Festival). All of this media does a very nice job of showing the challenges of cooking in the developed world: check out the first episode of Stoveman to see what’s involved in gathering cooking wood in Northern Kenya.

Ever charged your phone while cooking dinner? Of course you have: in the developing world, though, lack of access to electricity likely means that these two activities rarely occur in tandem. Biolite’s Homestove (another one we’ve covered before) not only addresses the health and environmental issues surrounding cooking, but also coverts what little waste heat the stove produces into electricity. The folks at Fast Company tried it out:

Know of other organizations, either for- or non-profit, doing amazing work on the clean cooking front? Let us know about them…

UPDATE: Can’t get enough? Head over to Ecopreneurist, where they’ve done more on this topic than I realized: a post from last Fall on the International Lifeline Fund’s stove program in Haiti (which also makes use of waste paper), and another on the Paradigm Project’s innovative use of carbon offsets.