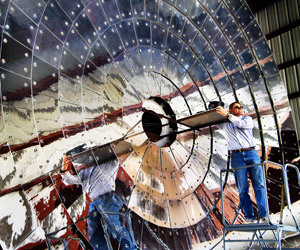 The end of 2007 brought with it news of cleantech developments for 2008 and beyond. Here are a few that I found most interesting. Do any sound promising to you?

A Minnesota company called Renewafuel has developed a biomass briquette that is similar in size and moisture content to coal, produces a consistent and comparable amount of heat, emits far less sulfur dioxide and particular matter and generates nearly twice as much energy as other biomass. While the company touts the “fuel cubes” becoming to coal what ethanol has been to gasoline, others are more cautiously optimistic.

Matt Norton of the Minnesota Center for Environmental Advocacy pointed out that the efficiency and sustainability of the cubes depend on the biomass materials used to make them. If Renewafuel relies too much on wood for production, that hurts the company’s claims of the fuel’s carbon neutrality because the carbon stored for decades in the trees would be released, rather than using something like grasses that have a shorter CO2 cycle:

My fear is that wood is there and it’s ready, and it’s what they’re going to turn to. And if they start consuming wood, then the claims they make with regard to carbon neutrality are not borne out. If they start consuming prairie grasses, hats off to them. This could be something we would support in a big way.

Currently, the cubes are made from a mix of plant materials that include wood and grasses. What’s more, Renewafuel says that cubes can be blended with or substituted for coal in existing burners with little or no modifications.

Solar trees are structures that look like…well, trees except instead of branches there are poles and instead of leaves on the end sit solar cells. Prototypes were tested in October on the streets of Vienna, Austria and have been judged a success: They stored enough electricity to provide adequate light at night, even when the sun wasn’t shining for as many as four days in a row.

The solar trees have rechargeable batteries and their branches include 10 solar lamps with 36 solar cells. A sensor measured the daylight and triggered the lamps to go on at dusk and off at dawn.

Vienna’s now deciding whether to install more of the trees. Over in North America, Google announced that it’s “planting” solar trees at its headquarters. The trees will make up about one-third of the 9,000 solar panels planned to power 30 percent of Google’s electricity. Google’s structures (though not as aesthetically pleasing as Vienna’s) will sit on top of poles in their parking lots.

Researchers at the Sandia National Laboratories in Albuquerque claim that concentrated solar power could be used to turn water and carbon dioxide (CO2) into liquid fuel.

Using a device called the Counter Rotating Ring Receiver Reactor Recuperator (no kidding), or CR5, is used to break a carbon-oxygen bond in the CO2 and add water to form carbon monoxide (CO), hydrogen and oxygen in two steps. Then researchers say they can turn that CO into fuel.

But you can’t fill up with it anytime soon: the CR5 device won’t be ready until next year and scientists say the fuel won’t make it to market for another 15 years. But if they are successful, the fuel could be transported through existing oil and gas pipelines and work in regular gas or diesel engines.