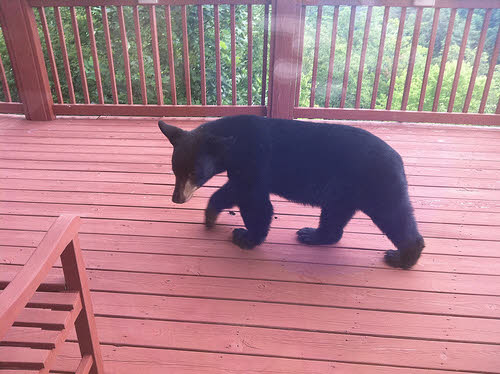 You read that right. This month, a young black bear was found in a tree outside an apartment building. Bear populations have been expanding in Pennsylvania and West Virginia, meaning some male bears need to wander farther – say, into the lawns of Cleveland’s suburbs – to stake a claim on territory.

While it makes for interesting headlines on the small scale, the competing interests of humans and animals on the global scale could spell doom for wild creatures. Animals truly are one of the biggest losers as global human population shoots past 7 billion.

In many parts of the world, biological diversity is being threatened by the expansion of humans into new territory. Population growth has increased the amount of water and land needed to meet our food and energy needs. When land is cleared of trees and crops are planted, roads build and buildings erected, wildlife habitat is destroyed, and animals get crowded out. As climates change, countless plant and animal species may lose their homes in fragile ecosystems.

As researchers Jeffrey K. McKee, Paul W. Sciulli, C. David Fooce and Thomas A. Waite of The Ohio State University wrote in a 2003 analysis: “Abating human population growth is a necessary, if not sufficient, step in the epic attempt to conserve biodiversity on the global scale.”

We added another billion people to the planet in just the past dozen years. We’re witnessing the sixth great extinction in the history of our planet. The last one occurred about 65 million years ago when a great meteorite may have crashed into the Earth, dooming the dinosaurs. Today, we are the meteorite.

So how do we help slow down population growth? We make sure women the world over have the ability to plan their families. When women have access to contraception, they invariably choose to have smaller families. Smaller families have a smaller impact on the environment – and on the animals with which we share the Earth.

Unfortunately, the tide may be turning away from greater contraceptive access. Here at home, the House this year has taken numerous votes in favor of cutting off family planning resources for women both here and abroad. And it’s entirely possible that we’ll see the reinstatement of the “Global Gag Rule” – which hampers reproductive health providers and hurts the world’s most vulnerable populations.

So while you’re considering the impact of bears in Cleveland, keep in mind that in many places around the globe, we people are the ones making the most lasting impact. Ensuring that we’re leaving enough resources for bears and other living creatures isn’t just right – it’s our human responsibility.

John Seager is President of Population Connection, the nation’s largest grassroots population organization. He can be reached at john@popconnect.org.