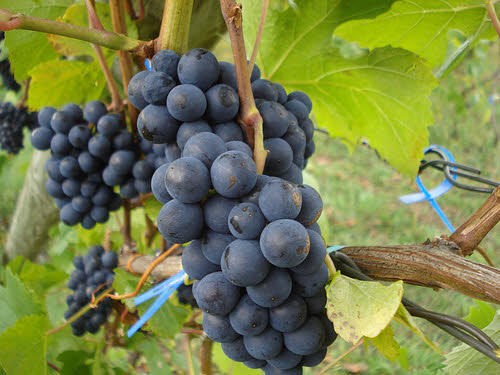 I thought I’d take a break this week from sharing eco-chic fashion news and instead tell you how Mansfield Frazier, longtime activist and Hough resident, is transforming his Cleveland community one grapevine at a time.

With years of gardening experience and dreams of starting an urban vineyard, 69-year-old Mansfield and his wife, Brenda, were awarded proceeds from a grant funded by Re-Imagining Cleveland and Neighborhood Connections, a program of the Cleveland Foundation, to develop three abandoned city lots.

Mansfield and local volunteers went right to work clearing, layering and leveling the lots’ topsoil and trimming existing trees. A decorative fence, support stakes and wires also were installed to protect the now 294 Traminette and Frontenac grapevines growing in the vineyard known as Chateau Hough. Take a look here to see how the project has progressed since 2010.

The Fruits of their Labor

As a well-respected author and journalist, Mansfield hopes the vineyard will be used as an avenue to teach horticulture practices and entrepreneurial skills to neighborhood youth, residents reentering society from a time of incarceration, and others with disadvantaged backgrounds, as he, too, has used community resources to turn his life around after serving several prison terms. Furthermore, the vineyard will become a symbol of economic growth and hope in a neighborhood most famously known for the riots of 1966.

A useable yield of grapes is expected to be harvested next year and then the actual process of winemaking will begin under the guidance of vineyard expert Giancarlo Calicchia. Mansfield foresees the crops growing to supply a local winery under the same ownership as Chateau Hough and have plans of adding a biocellar, which will be built in a nearby abandoned house, to the estates. He and his crew would like to grow shiitake mushrooms and other produce.

Similar to urban gardens in Chicago, Detroit, Kansas City, and Baltimore, Hough’s vineyard is creating vital “fruits” of self-sufficiency, pride and empowerment, revenue, and an abundance of knowledge within the community and for its members, things which lasts far longer than wine alone.