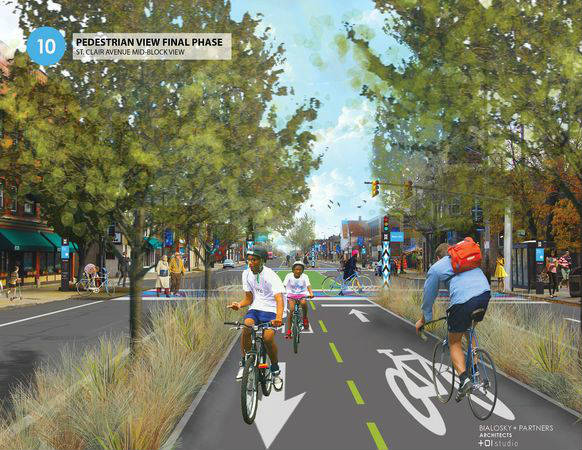 The Rails to Trails movement has a wide variety of transportation repurposing projects to its credit: from New York City’s High Line – a park/walking space on an old railroad trestle – to Missouri’s state-spanning Katy Trail. In Cleveland, clean transportation proponents have take a look at former streetcar rights-of-way, and thought “Hey… those could make good protected bike lanes.” They could also bring some economic activity to locations largely deserted since the streetcar ran by them.

That’s the genesis of the Midway project, which Cynthia Shahan from Cleantechnica has covered in more detail…

Many America cities revolved around streetcars in the last century. In Cleveland, the streets Lorain, Superior, and Euclid were core to the city’s streetcar system, running to all of the city’s neighborhoods. As cars crept in and replaced streetcars, these core modes of trransport and cosmopolitan life fell away. Streetcar tracks paved with cement left wide empty streets longing for more stores. The streets showed vacancies due to population shifts to the suburbs and lack of nearby pedestrians and streetcar riders in wait.

But Clevelanders now propose to bring activity back to these areas. Local bicycle advocates intend to bring about a more diverse transportation system in Cleveland once again. Their proposal, named Midway, will manifest as green, landscaped, center-running, two-way bike lanes traversing the city, right where the former streetcar lanes once flourished.

St. Clair Superior Development loved the idea and transformed St. Clarie Avenue (see visualization above). Joining with the Midway team, they built this first segment with a grant from the Kresge Foundation.

The streetcar lanes run throughout the city. Advocates believe with some paint and bollards, this transformation will be inexpensive and scaled up if it does well.

Other bike path stories show the widespread transition of city streets to include bike lanes. Check out these cool ideas and other news: