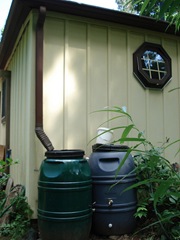 Just as technology continues to infiltrate the masses, becoming less and less a geeks toy, so environmental consciousness and awareness continue to spread. For some, it might be as simple as bringing calico bags to the supermarket. For others, it is taking your house off the grid and growing your own veggies.

But one area that a lot of families and households are stepping up in is the collection of rainwater.

It isn’t like this is a new activity either. Our ancestors would have spent a lot of effort to collect rainwater, to save themselves the need to trek down to the river or well. But now, it’s happening because across the planet, drought conditions are making life more and more difficult.

MSNBC ran a story that sparked my desire to write about this. They wrote of people, specifically in Texas, North Carolina and California, stockpiling water during the rainier times. But the desire to save water is really a planetwide activity.

Here in Australia, it’s common practice now to step into the shower with a bucket at your feet. Rubbish bins are wheeled under gutter runoff when the rains get heavy, and a large majority of watering the plants is fed by Monday’s rain.

Those who take it a step further turn off the tap in the toilet, and fill up the tank with gray water from showers.

Apparently, the city of San Francisco will be putting $100,000 towards running how-to workshops on collecting water. They’ll also be offering rebates and discounts on rainwater catchment tanks. Here in Australia, such rebates and discounts have been commonplace for a year or two now, and the two big home-hardware stores are always running a how-to of some sort.

So, if you’re not doing your part to save some water, what’s your excuse?

credit: fireballsedai at Flickr under a Creative Commons license

More on Home Sustainability at the GO Network