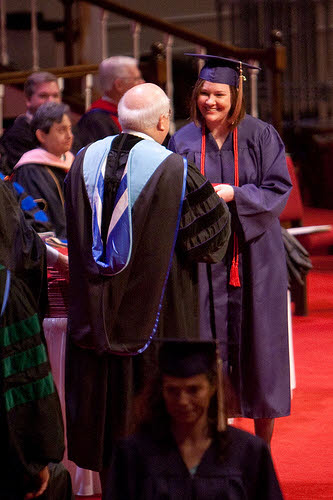 In April four years ago, Business Week published a story called “The Greening of America’s Campuses” in which the writer noted “College students across the country are fired up about global warming, and they’re gathering online to agitate for change; is this the next big youth movement?”

Based what’s happened since then, I’d say the answer to their question is a resounding “Yes!” In fact, Newsweek reported in that same year that institutions of higher education had launched at least twenty-seven green-themed academic programs.

Look at all of the action that’s occurred since then; a quick Google search turns up news story after news story published in campus magazines about how students have begun or supported a green initiative at the university.

Now, however, we have begun to see university administrators taking their cue from these student movements. For example, the administration at Fairfield University in Connecticut is one of several schools to recently launch an official website that describes their green programs, such as teaching and research, living and learning, ways to get involved, and other campus sustainability projects. In addition to campus-wide projects, the university has also launched a Program on the Environment, which offers an interdisciplinary undergraduate degree, and an Environmental Life Residential College, which offers a specific residential lifestyle to students interested in the environment.

Other schools that have launched official academic programs in the past few years that reflect growing interest in the green movement have expanded the meaning of the ‘green degree’ to include all sorts of disciplines. Montana State University has created an interdisciplinary program that allows students to earn a Sustainable Food and Bioenergy Systems degree by taking courses in the Agriculture, Education, and Health and Human Development colleges. Aquinas College in Michigan offers a sustainable business education that is made up of conventional business classes and natural science courses. And last year, the University of South Florida opened the Patel Center for Global Solutions and the School of Global Sustainability, making it perhaps one of the ‘greenest’ universities in the United States.

Think about this: four years ago, freshmen entered many of those twenty-seven green programs. Many graduated this Spring with green degrees, searching for jobs, and looking to apply their newfound green knowledge to solving many of our environmental problems. The beauty of these green programs is they build a green infrastructure that will make use of our nation’s most intelligent students, connecting them to each other and to companies just as the military industrial complex grew into an established infrastructure.

I for one cannot wait to see the work that this new generation of “green” graduates accomplishes in the next five years.

Mariana Ashley is a freelance writer who particularly enjoys writing about online college. She loves receiving reader feedback, which can be directed to mariana.ashley031 @gmail.com.