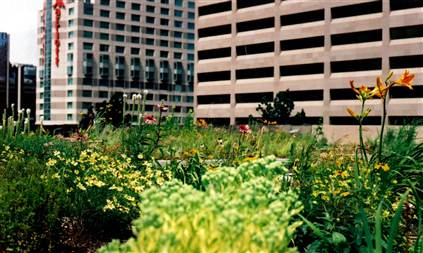 Thanks to sustainablog reader Eric Benson for pointing me to this article from yesterday’s Washington Post on the corporate world’s embrace of green buildings as a cost-effective way to address skyrocketing utility prices. While the much-touted Bank of America headquarters in New York, currently under construction, gets a lot of ink here, writer Steven Mufson takes note of building projects around the East Coast, as well as efforts owners of existing buildings are taking to cut power use. In all of these cases, the businesses pay homage to environmental concerns, but also note the bottom-line case for building green:

“It’s prudent on many levels,” said Kathy Barnes, senior vice president for property management at Akridge, which has 18 commercial buildings in the Washington area. “We all have a civic responsibility.” And, she added, “if we’re not doing it, we’re not going to be competitive in the marketplace.”

Commercial buildings devour more than a third of the nation’s electricity. During heat waves like the one this week, they often rely on auxiliary generators that are less efficient and more polluting than electricity on the grid.

While industrial use of electricity has flattened over the past decade, consumption by commercial buildings has risen about 4 percent a year, according to the Energy Information Administration. Energy-efficiency experts say that better construction techniques, new energy-saving devices and smarter management can reduce electricity consumption by 20 percent in older commercial buildings and up to 50 percent in new ones, vastly reducing air pollution and utility bills.

“We can do a lot,” said Quilian Riano, who works with a group called Architecture 2030. By 2035, virtually all commercial buildings will be new or renovated. “Are they going to be energy hogs or are they going to be different?” he said.

The article notes that these company’s aren’t only concerned with operating costs, but also investor confidence:

“The corporate world is catching on real fast,” Fox said. “They understand the financial benefit, but they also see this as the right corporate model. Stockholders are asking them what they are doing about climate change. When you get a blank stare from the CEO, that’s a problem.

One thing that seems particularly important about this trend: buildings will be used for a long time. I bring that up only because some may criticize the bottom-line mentality, claiming that should energy prices dip, corporations won’t have the same incentive to build green if we focus primarily on cost savings. That may be true for buildings not yet built, but these going up now will be used for a long time; additionally, they’ll continue to save these companies money even with low energy prices, as the primary costs come up front. Furthermore, the likelihood of energy prices dropping significantly just doesn’t seem realistic any more, as long as we’re talking about energy creating from fossil fuel sources. I think we’re seeing a real sea change here — as prices for building green continue to fall in line with more traditional construction, we may see green buildings become the norm.