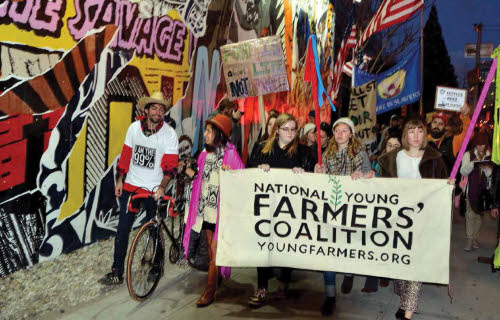 From the school cafeteria to rural tomato farms, and all the way to pickets at the White House, people are challenging the ways in which government programs benefit big agribusiness to the detriment of small- and mid-sized farmers. Urban gardeners, PTA parents, ranchers, food coops, and a host of others are organizing to make the policies that govern our food and agricultural systems more just, accountable, and transparent. They are spearheading alternative policies on the local, state, national, and international levels. Some advances include the following:

In preparation for the 2012 Farm Bill, for example, the Community Food Security Coalition, a group of nearly 300 organizations, helped the public learn about and lobby for the issues, and drafted a platform of top priorities. This built on coalition’s history of successful grassroots lobbying for Community Food Projects in the 1996 Farm Bill, wherein government grants go to food projects supporting lower-income communities. During the lead-up to the Farm Bill vote in 2008, community food, family farm, and farm-to-school organizations helped secure vital policy changes. These included placing a moratorium on land foreclosures under certain conditions, prioritizing socially disadvantaged farmers for federal loans and grants, and promoting locally grown produce in food stamp and school-lunch programs.

Despite the activism on the most recent Farm Bill, it was allowed to expire at the end of 2012 due to a stalemate in Congress around payments to farmers and broader budget issues. Congress implemented a nine-month extension, but several important programs were de-funded, including support for new farmers and farmers of color, conservation efforts, research into organic farming, and other progressive initiatives. Organizations of farmers and activists are now pushing for these to be reinstated in the next Farm Bill, which is slated for action in summer 2013. Groups such as the Rural Coalition and National Family Farm Coalition have been developing citizen-driven advocacy to ensure that priority programs addressing equity and access issues are not left behind.

To become an active and effective citizen-advocate:

Many thanks to Kathy Ozer and the National Family Farm Coalition for their generous help with information and analysis.