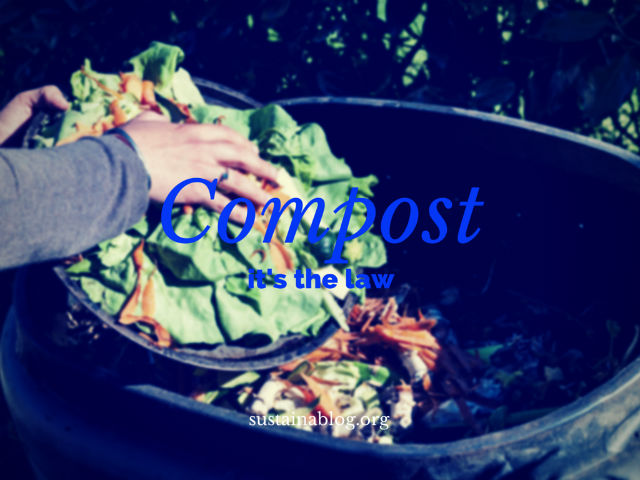 UPDATE (10/2/14): I was a bit disappointed with this report from CBS News on Seattle’s new fine for not composting, as I think it failed to address one of the most important elements of this story: the financial cost of sending organic waste to landfills. By stepping up enforcement of mandatory composting, the city should end up saving money, as well as reducing greenhouse gas emissions and saving landfill space.

Mandatory composting? Why, that’s just some kind of green fascist, politically correct…. something or other, right? I mean, why would you threaten people with a fine for not separating out their food scraps from their other trash? Why would you require a business to compost? That’s just trying to control people, plain and simple… right?

That’s the kind of response I’d expect from some people to mandatory composting plans in places like Massachusetts and Seattle. A recent post from Eat.Drink.Better, however, gives us several good reasons for requiring composting from American businesses and households, including

Furthermore, all of that food tossed out costs us: we’re running out of landfill space, so the price of dumping trash – regardless of what kind -costs us more. With composting, we can eliminate up to 25% of the waste that goes to the landfill… and actually get some use out of it.

Those financial reasons are largely what’s driving Massachusetts to start requiring businesses and institutions that produce more than a ton of organic waste each week to divert it out of the normal waste stream. Compost pick-up will save these businesses a bit of money – the pick-up itself is about 20% cheaper than normal trash hauling, and they’ll be able to go longer between trash pick-ups – but the real economic incentive may come from additional business opportunities and job creation. Massachusetts doesn’t have the necessary composting capacity in place yet, so no doubt quick-moving entrepreneurs will be able to take advantage of this situation. And waste doesn’t have to go to a facility that just makes compost: methane digestion is another option, so larger companies and facilities may decide to start producing their own energy. Or, those quick-moving entrepreneurs may strike again on this front.

Across the country in Seattle, the city council has decided to make the residential composting program – in place for all organic wastes since 2009 – mandatory. What does that mean? Well, you could get a ticket for not separating out those potato peels. The fine is pretty minimal – “$1 for each food-filled bin – and mainly serves to remind residents that the city’s taking composting, and the costs of not doing it, seriously. This requirement should be in place by next Summer.

Mandatory composting for things like yard wastes have been around for a while; things like food scraps are still pretty new, and, no doubt, some will complain. For those of you living with, or about to live with, such requirements, share your thoughts and experiences. What do others of you think: a good idea based in solid economics, or just more do-gooderism?