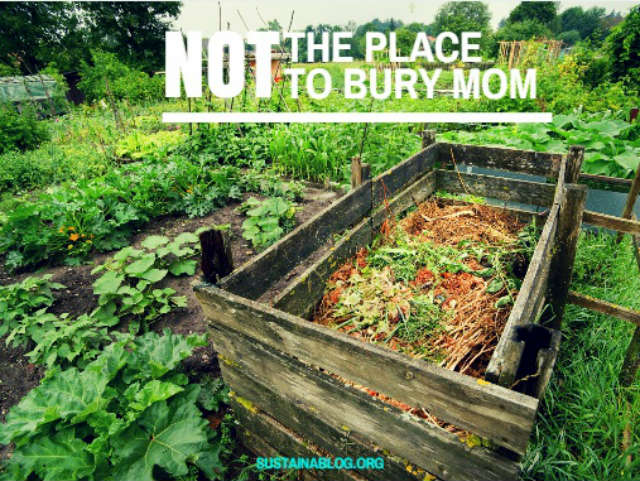 If you’ve ever read Paolo Bacigalupi’s The Windup Girl, you may remember that in his near-future dystopia, the dead are “mulched” (which I’m pretty sure means composted).  In this low-tech world crippled by climate change and other environmental disasters, dead bodies produce needed fertilizer; family rituals and such have to play a secondary role. Katrina Spade, the founder of the Urban Death Project, isn’t nearly so insensitive to claim that we’re living in a similar situation (nor to crack jokes like my headline), but she does think that our methods of disposing of the remains of loved ones can embody our emotional needs while also greatly lightening the environmental impact of traditional burial or cremation. So, while her motivations are very different from the society in Bacigalupi’s novel, her solution is pretty much the same: composting.

Now, we’re not talking about simply tossing your loved ones into a composting bin, or curbside pick-up truck. In developing her concept, Spade has focused on our need to celebrate and mourn our loved ones, and to treat their remains with dignity. So, the Urban Death Project model provides a space not only for the process of composting, but also the process of grieving. Space for funerals and other death rituals are a part of the plan, as well as areas for contemplation of the cycles of the natural world. At the core of the structure resides a 3-story composter designed to enhance aerobic decomposition and related microbial processes. In the space of a few months, our deceased loved ones are ready to return to the soil… literally.

As you might imagine, not everyone’s excited about this prospect: Washington state-based funeral director Dennis Murphy, for instance, told TakePart “That is not a dignified approach for the disposition of a loved one who has passed away.” His concern: this method would be less expensive than traditional burial or cremation, and thus would become the “cheap” option, rather than the dignified one.  There’s no reason that has to be the case, though: dignity results from the respect given by the living, not the method of disposing of a body.

One thing we do know: we can dispose of corpses through composting without creating unsafe conditions. Those who deal with dead bodies of animals do this regularly without creating health hazards (or even far-ranging bad smells). The cultural factors would likely be our main sticking points. What do you think: is composting a proper means of dealing with dead loved ones? Would returning them to the land – literally – make for a more – or less – meaningful experience for those left behind? Or is this just greenie hokum?