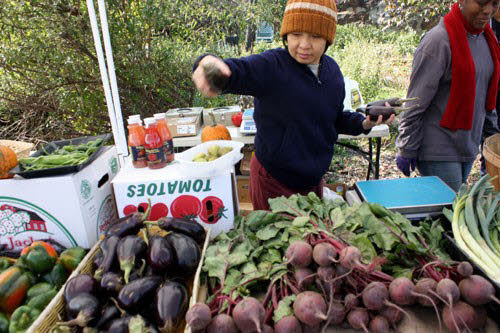 Another installment in the Harvesting Justice series.

Just Food in New York City is doing what its name suggests: working to make the food system more just. It does this, first, by making community supported agriculture (CSAs), farmers’ markets, and gardens, more accessible and affordable in the city. Second, it helps small farmers survive, and even thrive, in the process.

Former Executive Director Ruth Katz said the group grew out of a contradiction. “In New York City, we had these growing soup kitchen lines of people who couldn’t get food and, at the same time, nearby farmers going out of business because they couldn’t sell their food anywhere. It seemed strange that you couldn’t match farmers selling food with people needing food.”

So far, the organization has helped launch 214 CSA programs throughout New York City’s five boroughs, bringing fresh food to an estimated 37,400 people. To stock the CSAs, Just Food partners with farms outside the city, which bring in vegetables, eggs, fruit, grain, meat, and other products.

Ruth Katz said, “It can be frustrating because the scale of what we’re doing is so small. People say, ‘You have to scale up to make a bigger impact.’ Well, in this particular case, scaling up would defeat the purpose: farmer-to-consumer relationships that are creative and nimble enough to meet the unique needs of each neighborhood. Their smallness is part of their strength. That being said, we can scale up through replication, rather than super-sizing.

“Imagine that every tall building in NYC had a CSA! If one tall building or building complex has 500 families, then only 10% would need to become CSA members to support a small farm. And that 10% would be a lucky, well-fed group.”

The organization also aims to help people get involved with city-, state-, and federal-level food policy. They have created an NYC Food Justice Action Guide, which addresses a host of issues such as the city’s climate footprint and local food policies, as well as ways to organize community campaigns and pressure lawmakers. In 2010, Just Food won their two-year campaign to legalize beekeeping in the city. Over the last three years they’ve rallied people to take action on GMO labeling, anti-fracking, and farm bill campaigns. They currently convene the NYC Food and Farm Bill Working Group and are co-conveners of an upcoming forum with mayoral candidates to discuss the city’s food system.

Bringing the farm to the city

“Just Food envisions a socially just, environmentally sustainable and healthy food system for all,” said Jacquie Berger, Just Food Executive Director. As integral to this vision as making good food available in the city is their commitment to supporting new and small farmers. They currently partner with 100 farms outside the city. Some formerly struggling rural farmers now have a viable market and are able to get a higher price for their food than they would otherwise make through standard wholesale markets. As a result, a number of the farmers they have worked with have been able to leave the second jobs they held to supplement their farm incomes, or to secure land on which they had a tenuous financial grip.

One of their affiliated farmers, Sergio Nolasco, left a garment district job for farming and eventually managing his own farm. Shopping at markets in Jackson Heights, he missed the type of vegetables that he could get back home in his native Mexico, and began to think about growing his own. When the New York-based organization Greenmarket opened up four acres of a local farm nearly 10 years ago for immigrants to start farming initiatives, Nolasco became one of the first to start planting there. He now runs his own farm, Nolasco Farm, in Andover, New Jersey.

He said, “The experience of working in the markets and working with different communities, it’s great. I’ve met people from many countries. We talk about the farm, of course. And also we talk as friends, because they’re like part of the family now.

“I became interested [in farming] since I come from a rural area in Puebla, Mexico. [In New York] I was working in a building, locked up in a warehouse. And I wanted to feel like I was home again, in Mexico.

“We started with three acres in Westchester. I started with one stand… We are growing bit-by-bit. I didn’t have a truck. I didn’t have a tractor. Now I have two tractors and two trucks, I have six markets in the city and I am working with five CSAs. Having a CSA helps us. The community pays us money – some money in advance, so we can start the season and work sooner. This gives us the funds to invest in our business and then at harvest, pay them back with vegetables.”

Sergio Nolasco’s interview is from a Just Food video created by Anna Mumford and produced with a grant from USDA Risk Management Agency. You can watch the video at http://justfood.org/farmer-outreach/meet-just-food-farmer.