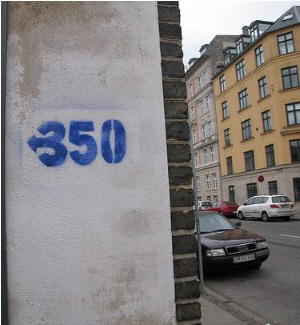 Editor’s note: So far, I’ve been quiet on the Copenhagen Climate Conference. This doesn’t mean I’m not interested, or don’t have thoughts… rather, there’s so much information coming directly from Denmark that I’d rather let those on the ground do the talking for now. Rolf Nordstrom, the executive director of the Great Plains Institute, is one of those people in Copenhagen, and he generously provided this post for us…

I arrived in Copenhagen on Monday afternoon and am still suffering a little jet lag, but I am awake enough to give you a glimpse of what the climate change conference taking place here these next two weeks looks and feels like, and how you might expect it to impact your life.

First, to give you a sense of scale, I want you to imagine that the vast Mall of America is filled not with shops of every kind, but with hundreds of booths from different organizations, temporary offices for delegates from 192 countries, vast meeting rooms set up with microphones and video screens, cafes, the mother of all cloak rooms, huge banks of computer stations (many with Skype and video capability built in), and the whole place teaming with people.

To get into this global “town hall” meeting, I waited in line with hundreds of others in order to get my picture taken and go through several security check points. Indeed, the elaborate airport-like security system rivals any major airline hub, complete with scanners and sniffing dogs. And all this only hints at the scale of this gathering.

If you don’t follow the climate change issue closely, it may seem like this conference in Copenhagen is coming out of thin air. But the international negotiating process on climate change has been going on for a long time and takes place through a series of meetings, each called a “Conference of the Parties to the United Nations Framework Convention on Climate Change” (or COP for short). This one, COP15, is my first and by all accounts the very largest of them all, suggesting that concern over the world’s climate has grown dramatically over the past 17 years; and of course the issue of climate change has been studied by scientists for decades prior to that.

High-level ministers and negotiators from all over the world meet every year to review the implementation of the overall Convention, which was signed back in 1992 in New York (including by the U.S.). Its objective is “stabilization of greenhouse gas concentrations in the atmosphere at a level that would prevent dangerous anthropogenic interference with the climate system.”

If you are a climate skeptic, being at this conference would prompt you to ask yourself, “if the science behind climate change is not compelling, then how is it that essentially every major country in the world-and many you’ve never heard of (think Tuvalu or Comoros), is convinced that climate change is a real and urgent challenge? Have their scientists and elected leaders all be hoodwinked?

We tend to be a bit isolated in our thinking in the U.S., but a lack of strong action on climate change has led to demonstrations in some 4,500 locations in 170 countries, and more are taking place here in Copenhagen. An example yesterday featured people convincingly dressed as trees being followed around by a scrum of reporters with cameras and sound booms as the tree people called for a halt to deforestation and the preservation of forests in the push for new forms of energy production.

No matter what happens here, you can expect there to eventually be an international agreement that places legally-binding limits on the emission of greenhouse gases. If I were a business, I would ask myself two questions:

At a minimum, you may want to stay informed. One good way to do that is to follow the proceedings and the U.S. government’s positions here in Copenhagen through this official Web site: http://cop15.state.gov/uscenter/multimedia/index.htm

Rolf Nordstrom is executive director of the Great Plains Institute, a Minnesota-based nonpartisan, nonprofit working with Midwestern States and Canadian provinces to accelerate the transition to a sustainable and prosperous low-carbon economy.

Image credit: The Will Steger Foundation