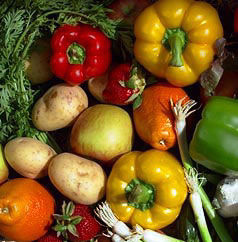 Central Pennsylavania’s Centre Daily Times has become a hotbed for discussion of food and sustainability recently. Today, Penn State human ecologist Christopher Uhl offers an idea that promotes both sustainable food and stronger community ties: a network of neighborhood “farms.” Uhl’s doesn’t spring merely from his deep thoughts, but from his recent arrangement with a neighbor:

I’ll be gardening in Mrs. Felice’s side yard. She’s my neighbor, an elder in town. She and her husband, Tony, moved into their place in 1950. In the early years, the garden spot served as a play field for the neighborhood kids.

Later, Tony put a vegetable garden there, and Mrs. Felice canned the harvest. After Tony passed on, the garden lay fallow for a long time.

That’s changed now. Last year, when I moved in next to Mrs. Felice, she agreed to let me grow vegetables there.

On the surface, this is just a story of neighborliness. I grow vegetables on Mrs. Felice’s land and share the produce with her. Deeper down within the soil of imagination, though, lies the seed of an idea that has to do with food, community, health and sustainability.

From this mutually beneficial arrangement with his elderly neighbor, Uhl extrapolates into a broader system of neighborhood food production:

Now, let’s scale up. Here in central Pennsylvania, we have a lot of land in our front yards, backyards, church grounds, school grounds, business parks that could be used for the growing of food.

At present, we spend a good bit of time and money maintaining our largely sterile lawnscapes. Many of us even hire gardeners to care for our grounds. As an alternative, why not allow a young person, anxious to get a start in agriculture but without the means to buy land, to start a neighborhood “farm” by knitting together land parcels in your neighborhood, thereby creating a patchwork farm. Those of you in the suburbs, with half acre and acre lots, could be heroes as you transform your subdivisions into diverse, productive patchwork farms.

Think of the advantages: You’d get fresh veggies, make deeper connections with your neighbors, give your kids the chance to live in the midst of something real and vital, and have the satisfaction of knowing that the surplus food from your land was going to be offered to others through local and regional farmers’ markets.

It’s “just an idea” whose time may have come ….

When placed in the context of our current unsustainable system of food production (which Uhl details), this sure seems preferable in so many ways: not only do we end up with healthier food with a much light footprint, but also strenthen ties with our neighborhoods and communities (something sorely missing in the US). I’d think that such a concept would catch on better in urban, as opposed to suburban areas, but perhaps I’m underestimating suburbia… Interestingly, Uhl never mentions organics or permaculture, but I’d think these concepts would almost naturally spring from such relationships: how neighborly is it to throw chemicals on a shared plot of land…