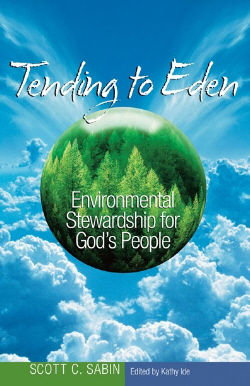 While many of us in the environmental community literally “rejoice” in the growth and prominence of the creation care within evangelical Christianity, I’d guess we’re still trying to figure this movement out. I think the same probably goes for more traditional evangelicals, who (at least in my experience) often question the adherence of these people to a brand of faith rooted in Biblical literalism.

While Scott Sabin’s new book Tending to Eden: Environmental Stewardship for God’s People seems more focused on the latter audience, I think it’s a book mainline environmentalists could gain a lot from, also. Largely devoted to the work of Plant with Purpose, a 25-year-old “Christian humanitarian organization dedicated to helping the rural poor” (of which the author is now the executive director), Sabin’s book also focuses on the growth of his own faith through his work with the organization, and the idea that Creation Care isn’t simply a form of “Christian environmentalism,” but rather an expression of a meaningful understanding of the relationships between human beings, the planet, and the Judeo-Christian God which created the two, and redeemed them through Christ. Sabin himself sums this up aptly towards the end of the book when he claims:

If you’re coming from either a strict environmental or strict evangelical perspective, that idea may require some work to wrap your head around. Creation care is about both faith and works in Sabin’s view… and both are diminished when not accompanied by the other.

For the environmentalist who doesn’t ground his/her passion, advocacy, and work in faith, Tending to Eden is replete with stories of eco-effectiveness. Plant with Purpose serves rural communities in the developing world, and much of their work focuses on replenishing depleted resources that keep farmers from producing enough to feed their families and communities.

For Sabin and his organization, that often comes down to a focus on deforestation. Whether trees are cut by large, industrial-scale timber operations or by indigenous farmers clearing land for crops, or turning wood into charcoal, the results are the same: degraded soils and watersheds that make even subsistence farming nearly impossible. Various kinds of reforestation activities serve to provide food, expand economic opportunity, and allow local residents to take a longer view towards their own survival.

Sabin makes clear throughout that, while he’s been involved in missionary work for years, he doesn’t think it, or other traditional forms of humanitarian work are ultimately very effective. In Chapter 5, Sabin explains many of the economic empowerment initiatives of Plant with Purpose. From micro-lending to community bank development, the organization’s work has involved “helping people to help themselves”… and to do so in a manner that recognizes cultural differences as well as legal hurdles that could undermine the most well-laid plans. As with environmental challenges, Sabin encourages “upstream thinking” (or “systems thinking,” if you prefer): understanding and appreciating the full scale of short and long-term challenges before taking action. He argues that direct aid aimed at short-term challenges has often created dependency; recognizing the bigger picture,  drawing on the knowledge and experience of rural residents themselves, and providing “hands up” rather than “hand outs” creates more sustainable paths to economic independence.

Creation care as an expression of faith

Throughout the book, and especially in Chapters 8 and 9, Sabin discusses his faith, and how the work he does is based in his Biblical belief. Rather than simply listing Biblical edicts to care for creation (though he does do this), Sabin discusses creation care in terms of a believer’s relationship to God. It may surprise a secular environmentalist, but Sabin doesn’t believe that humans are key to environmental restoration: it is in God’s hands. However, he also notes how the work of helping God in that restoration is an act of faith, and an understanding of the Creator’s love for his creation.

One section that particularly caught my eye was Sabin’s direct dismissal of the notion that Christians involved in creation care somehow “worship the planet” (good buddy Bobby B. has described this as “Gaia worship”). Sabin notes

I find this puzzling, because wilderness and nature have the opposite effect on me. My involvement in environmental issues has taught me about the incredible intricacy and complexity of God’s creation, reminding me of God’s attributes and my own humble place in the world. “What is man that you are mindful of him?” (Psalm 8:4)… I have met many Christian biologists and ecologists who have helped me to rediscover awe and wonder in creation and to see the signature of the Creator in unexpected places. I was surprised to discover how consistently they employed Scripture in seeking to understand our role in taking care of the earth.

There’s no doubt that both secular environmentalists and traditional evangelicals will find much that challenges (as well as inspires) them in Tending to Eden. Sabin hasn’t tried to gloss over the education it took for him to reconcile his faith with his environmental and humanitarian work, and he never steps back from the notion that he views it all holistically: environmental restoration, economic empowerment, and spiritual inspiration are all integral components of his and Plant with Purpose’s mission.

Members of the above-mentioned groups may not necessarily find themselves converted one way or the other… but they’ll definitely have a clear understanding of the interconnections that exist between the faith and work so lovingly rendered in this book.

Please note: Plant with Purpose provided me with a free electronic review copy of Tending to Eden, as well as the images in this post. They’ve created a page on their website dedicated to the book — if you buy via their Amazon link,

Tending your own garden? Take a look at our eco gardening supplies in the Green Choices store.