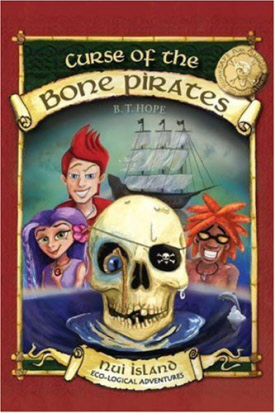 We do a lot of book reviews here at sustainablog, but non-fiction tends to dominate… and the little bit of fiction we have covered is aimed at an adult audience. The pre-teen set apparently goes for wizards or vampires; sustainability usually isn’t a part of the mix. So when the Green Leaf Book Group offered to send me a copy of B.T. Hope’s The Curse of the Bone Pirates (affiliate link) for review, I was intrigued…would there be such thing as an eco-themed novel for kids that they’d actually want to read?

Authors Brian Machovina and Tina DiCiccio (who use the pseudonym B.T. Hope) clearly put that question first and foremost in composing this novel, and didn’t let their environmental message get in the way of a good story. Set on the South Pacific Island of Nui, The Curse of the Bone Pirates features many of the elements I associate with contemporary juvenile fiction: strong supernatural elements, a mystery/thriller story line, and young, appealing characters that are a bit exotic, but not without typical pre-teen flaws and challenges.

Protagonist Brett (aka Big B) finds himself a “stranger in a strange land” when his mother whisks him away to Nui Island to check up on his grandfather, an eclectic scholar who’s fallen ill with a strange condition that makes his speech almost unintelligible. A Chicagoan with a penchant for skateboarding, hard rock music, and, of course, his cell phone, Big B isn’t quite sure how to navigate this remote island with spotty cell service, and his grandfather’s off-the-grid home with no television. New friends Sam and Nalu introduce him to island life, and also help him delve into the mysterious circumstances of his grandfather’s sudden illness. As they dig deeper, things become stranger: Big B experiences strange dreams and visions; objects such as amulets and cell phones seem to want to communicate with the kids; a seagull seems to have developed unnatural hostility towards them. They figure out that an generations-old island legend may not be just a story.

The book’s entertaining and well-paced: I didn’t want to put it down. That might seem at odds with a work that also defines itself by its environmental message, but Machovino and DiCiccio do a very nice job of weaving these elements naturally into the story. Big B’s grandfather, Professor Prune, has created his home around closed loop and natural systems, so topics such as composting and natural building work right into Big B’s adaptation to his new setting. The authors also challenge their readers with complex subjects: biomimetics and evolutionary biology, for instance, appear in certain contexts. They don’t, however, make the mistake of having characters go into lengthy discourses on these subjects: they give just enough information so that a curious young reader could follow up on the topic if s/he desired.

As such, The Curse of the Bone Pirates achieves a really steady balance between an educational work and a really good story. There’s no greenie preaching: just details of living in an environment in which careful management of resources is necessary for a comfortable lifestyle. Of course, in learning about this new setting, Big B also gets a sense of the excesses he consider absolutely normal… but still, no artificial moments where he suddenly comes recognize the waste we create… just an acceptance on his part as to why these people live as they do, and realization that practices that are alien to him make sense.

Of course, we may yet see more of an awakening on Big B ‘s part: the book’s ending ties up some of the story lines, but leaves plenty of room for subsequent “eco-logical adventures” on Nui Island. Even though these books are aimed at a much younger demographic, I’ll probably keep an eye for more parts of the series… I really enjoyed reading this one!

Read this book? Got a young reader at home that has… or might like it? Let us know what you think… The Curse of the Bone Pirates was published by Nui Media and Entertainment (whose site seems to be down); the Green Leaf Book Group seems to be helping out with promotion and marketing.

Help your kids dress cool and green: check out our current offering of kids’ clothes, including t-shirts, shorts, jeans, and hoodies.