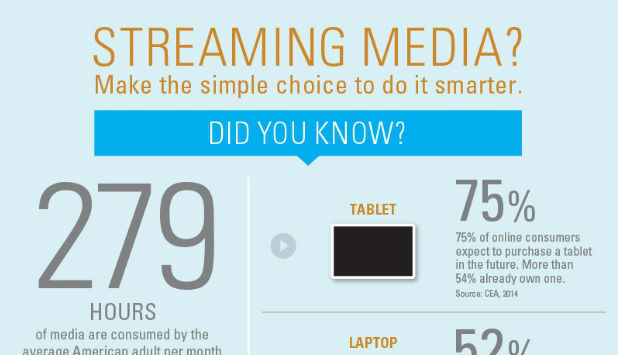 I’ve been pushing the concept of “cutting the cord” at home: that is, getting rid of cable, and instead using an antenna and streaming device in conjunction with our wireless internet for our television entertainment. It would definitely save us money – streaming services like Netflix and Hulu Plus are much cheaper than digital cable. Until I saw this infographic from ENERGY STAR, though, I hadn’t thought about what it might do to our electricity use.

The era of the widescreen digital TV has really dialed up the energy we consume with home entertainment: those original HD televisions really sucked down the juice. They’re better now, especially when equipped with LEDs and other power saving elements. But if you’re going to cut the cord, you’ll want to consider how: the choices for streaming come with a wide range of energy consumption.

For instance, avoid the game console for streaming: they’re the biggest energy hogs of the bunch. My streaming device connected to the TV should be OK… but choosing an ENERGY STAR rated television will make for a more efficient choice. Watching on a laptop or tablet wins the day in terms of energy use.

Take a look at the infographic below for more details of efficient streaming. If you’re got ideas, or even experience with these considerations, share your thoughts with us in the comments.

Need to see a larger version of this graphic? Click here.