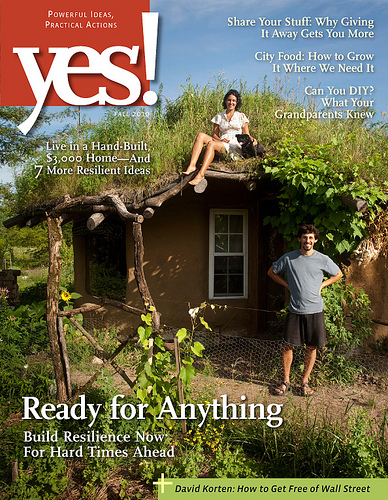 Every dreamed of building your own house? By hand? With natural building materials and techniques? It’s a task many of us would shy away from, but our own ziggy did just that at the Dancing Rabbit Ecovillage… for a mere $3000. And, despite a lack of building experience, the finished product is not only functional, but gorgeous… I’ve seen it in person, and many sites have featured pictures of ziggy’s cob house.

ziggy’s now getting attention from the print media: YES! magazine not only has an article on the cob house in its current issue, but also features a photo of it on the cover (shown above). They’ve also published a slide show of the building process on their site. While ziggy’s house is fairly simple (no power, for instance… he chose to live without electricity), it’s also a testament to the notion that building doesn’t have to involve professional contractors… you can do it yourself.

Tempted to give it a shot? If you’d like some training before delving into your own structures, Dancing Rabbit offers work exchange opportunities, and even green building jobs, for folks ready to try their hand at building with earth, straw, and salvaged materials.

Living without electricity may be a bit radical for you… but you can power your home with renewable energy. Check out our current listings of solar panels, vertical axis wind turbines, and complete home solar power systems.

Image credit: YES! Magazine via The Year of Mud