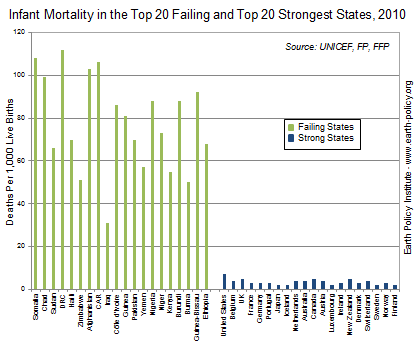 After a half-century of forming new states from former colonies and from the breakup of the Soviet Union, the international community is today faced with the opposite situation: the disintegration of states. Failing states are now a prominent feature of the international political landscape.

The most systematic ongoing effort to analyze countries’ vulnerability to failure is one undertaken by the Fund for Peace and published in each July/August issue of Foreign Policy. The research team analyzes 177 countries and ranks them according to “their vulnerability to violent internal conflict and societal deterioration,” based on 12 social, economic, and political indicators. Each indicator is scored from 0 to 10. A combined score of 120 would mean that a society is failing totally by every measure. Somalia, the country first on the list, scores 113.4. A score of 0 is the strongest score possible. Finland, number 177 on the list, is the strongest state with a score of 19.7.

Comparing the weakest states and strongest states reveals that rankings on the Failed States Index are closely linked with demographic indicators.

Women tend to have the most children where they lack access to family planning and where girls are not enrolled in school, as is the case in many of the top failing states. In Yemen, which has a fertility rate over 5 children per woman, 51 percent of married women have an unmet need for family planning—the highest rate in the world. One third of Yemen’s girls are not enrolled in primary school, among the lowest enrollment rates in the world. In contrast, the top strong states have low fertility rates, many falling below 2 children per woman.

A look at countries’ age structures shows a marked relationship with the strength of the state. Countries with 60 percent or more of their population under 30 years of age and poor employment prospects are considered especially at risk for political instability. In 19 of the top 20 failing states, at least 60 percent of the population is under 30. Twelve of the top 20 failing states, including Pakistan, Nigeria, and Afghanistan, have recently been plagued by armed conflict.

Infant mortality among failing states is high. Infant deaths are highest where households lack access to clean water, babies are not born in a healthcare facility, and mothers lack education. Somalia, the country with the worst failing states score, has the third highest rate of infant mortality in the world. Only 9 percent of women in Somalia deliver their babies in a health facility. Just 30 percent of the population has access to improved water sources, the lowest share in the world.

As the number of failing states grows, treating the causes of state failure is increasingly urgent. Providing universal primary education and access to family planning services can help alleviate the demographic strains on societies.

For more information on the risks of state failure and how to bring countries back from the brink, see World on the Edge by Lester R. Brown at www.earth-policy.org.