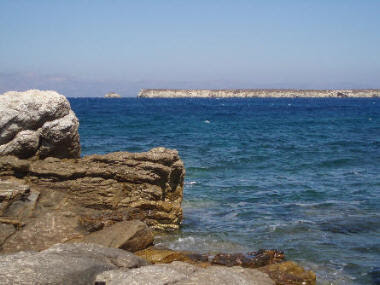 Apologies for being slow with my cross posts this week — I’ve been having a great time, and staying busy, so have to fit in blogging when I can; having occasional connection issues, also. I published this post on Wednesday at Green Options:

Tuesday morning, I got to attend my first major session at the Papandreou Foundation’s Symi Symposium. Entitled “Energy in Flux: Safe Passage to a Future of Alternatives,” the session consisted of three presentations on transitioning to a new energy future, and a lively debate over the challenges and opportunities created by the need to shift energy priorities in the face of global climate change.

Overall, I was delighted by the optimistic tone that ran throughout these presentations (which, in some cases, became points of contention in later open discussion): all three speakers acknowledged the enormity of the environmental challenges we face, and noted that combined efforts of the public and private sectors will be necessary to mobilize the larger public to action. In each presentation, the speaker focused on public involvement (in the roles of consumers and citizens), and made the case that an educated populace will provide the momentum for adoption of clean, renewable energy options. Let me just give a very brief overview of the main points offered by each speaker.

The first presentation focused on consumers’ roles in transitioning to a low-carbon energy infrastructure. Dr. Joseph Stanislaw noted that, traditionally, when we talk about energy, we talk about supply: where does it come from? He argued that a shift in mindset and language towards the services energy provides creates greater opportunity for transitioning towards more sustainable energy options. Consumers don’t want energy created from coal, or from solar power, for that matter: they want the services that reliable energy provides. By focusing on meeting this demand, we can address our contributions to climate change by implementing currently available technologies (particularly conservation technologies) while also working on the next generation of cleantech solutions. Consumers can be empowered to contribute to lower consumption by educating them on the “low hanging fruit” available: CFLs, for example. Finally, Stanislaw noted that the private sector is well ahead of the (US) government in recognizing these opportunities: he specifically discussed Wal-Mart’s sustainability efforts.

The second and third presentations both focused on engaging populations as citizens in transitioning towards cleaner energy technologies. The first of the two, presented by James Fishkin of Stanford University of the two described experiments conducted by Texas utilities in “deliberative democracy”: representative groups of customers were brought together in person, and through television, to discuss opportunities to purchase “green” power through their utilities. The sessions served to both educate the people gathered, and to listen to their concerns. These sessions produced amazing results: before these sessions, 52% of these consumers will willing to pay more for green energy; afterwards, 84% expressed willingness. The speaker noted the the increased prices don’t have to be much larger: even a $.25 addition to customers’ monthly bills would generate millions of dollars for increased renewable infrastructures. The success of the Texas experiment has led to other requests to hold such events: they’ve been repeated in Nebraska and Nova Scotia (with similar positive outcomes), and more will be held in Vermont, and as part of the next National Governor’s Association meeting. The third speaker, John Panarenos, provided the results of a similar effort in Europe: when asked, the representative samplingof citizens choose “energy and environment” as the most pressing issues facing the EU. The combination of terms was important — when the word “environment” was presented by itself, it didn’t receive nearly as high numbers.

As you might imagine, other symposium delegates had plenty of questions and even challenges for these speakers. A few points offered:

Needless to say, this session was fascinating and provocative: as the first speaker noted, we can’t separate energy issues from climate change, so these kinds of discussions are necessary. I’ve just given the briefest of overviews here — feel free to offer comments or ask questions…

The evening sessions at the symposium are shorter and a bit less formal. Tuesday’s evening’s focused on a presentation by Kim Alter (Oxford University) on the concept of social entrepreneurship and social enterprise: the hybridizing of business and non-profit models into a unique endeavor that harnesses market forces in innovative ways to address social (and environmental) challenges. As with the morning session, the discussion was lively following the presentation. The concept of social enterprise as a distinct category, rather than another form of non-profit, was a major question for participants in the discussion.

Wednesday was a day off, and many of us took a day trip to the island of Antiparos. I’ve uploaded photos at GO, and invite you to take a look (and to forgive my meager photography skills).