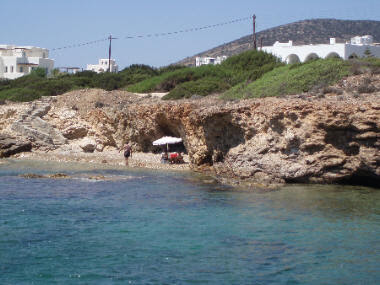 Finally getting up to speed here — of course, that must mean it’s the last day of the symposium. Here’s my report from yesterday’s morning session, which is also published on Green Options.

Thursday morning’s session at the Papandreou Foundation’s Symi Symposium focused on the “green economy”: how to craft economic policy that both internalizes the costs of a carbon-based economy, and creates incentives to move away from carbon-intensive energy sources. The presenters in this session were Joseph Stiglitz, professor of economics at Columbia University and former member of the Clinton administration, and Angelo Consoli, Director, Codeco s.s., European Affairs and Progressive Communication.

Professor Stiglitz’s presentation picked up on a theme that has run throughout the conference: the question of the best economic mechanisms to address climate change. Stiglitz argued (as have others) that a carbon tax is preferable to a cap and trade system (the model embraced by the Kyoto treaty, and much of the business world). Because changes in the market away from fossil fuels will inevitably make those energy sources less expensive, carbon taxes keep their prices high, reflecting the costs imposed on society by carbon emissions. Stiglitz also argued that such taxation responds to another reality: market-based approaches won’t work by itself, and government investments in infrastructure, research, and preparedness will be needed to round out a comprehensive approach to fighting climate change.

Other costs that the developed world likely will face stems from advancing the concepts of energy security and independence. If countries like China and India act in accordance with these concepts, that inevitably means that they’ll be burning more coal — China is already building coal-fired power plants at the rate of one/week. This could be disastrous in terms of climate change, but it points to the need for developing countries to build their energy infrastructure. If countries like China and India have to impede their own development to play a part in a global response to the climate crisis, Stiglitz argued that they should probably be compensated.

All of these question are important for the next round of climate negotiations. Stiglitz noted that in order to bring the developing world into this process, measuring carbon emissions on a per capita basis will be critical, as will a strict enforcement system. His last point: trade sanctions will likely be the most effective means of enforcing adherence to carbon mitigation strategies adopted by the international community.

Consoli’s presentation dealt with a completely different issue: the necessity (his argument) of developing the hydrogen economy in order to address global warming. He argued that one of the major impediments facing the growth of renewable generation technologies is storage, and that by using renewables such as wind and solar power to electrolyze water and create hydrogen, we can overcome that impediment. Consoli noted that the development of such systems, which would be decentralized, also has the benefit of empowering (in every sense of the word) people around the globe without access to electricity, or the capital to create it with current centralized generation technologies. The economic effect of such a transition involves a move from carbon-intensive energy sources, which require high amounts capital, to renewable sources that require high amounts of labor, so renewable production of hydrogen as an energy storage mechanism ends up boosting employment and economic growth.

As you might imagine, the questions and responses came quickly and furiously to these presentations, and included thoughts about the political reality of carbon taxation, the idea that such taxes create a right to pollute, the problem of hydrogen generation from “dirty” sources, and the methods by which governments can encourage their citizens to accept changes that could be painful in the short term. As usual, I’m giving a quick and dirty overview here — feel free to ask questions or offer your own responses.