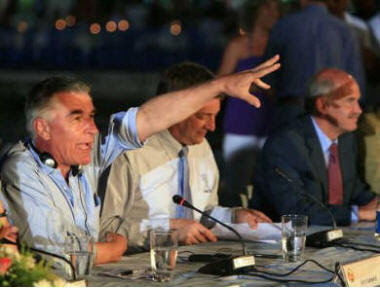 Wanted to get this up last night, but was still feeling the effects of jet lag. I’ll have something original for you this evening, though…

While my title is not exactly accurate, as I’m back home in St. Louis now, I wanted to get in one more post wrapping up my coverage of last week’s Symi Symposium in Paros, Greece. I also want to thank the folks at the Andreas G. Papandreou Foundation for inviting me to attend the symposium — it was a great time, and a week full of learning.

The final symposium session I attended (on Friday) addressed the important issue of climate change in the developing world. Moderated by Kumi Naidoo of South Africa-based NGO CIVICUS: World Alliance for Citizen Participation, the speakers at the session focused on the challenges climate change presents to the world’s poorer nations: namely, that while these countries historically have had the lowest levels of greenhouse gas emissions, they will likely be hit the hardest and fastest by the effects of global warming. Speakers addressed the issues of inequality tied up in the climate change debate, the notion of environmental justice, and specific problems, such as deforestation, that will increase the level of suffering endured by the world’s poorest citizens.

Friday evening, all of us gathered in the village of Naoussa for a closing ceremony. It was quite an event, as media crews were on hand to hear concluding comments by a number of symposium participants, and our gracious host, George Papandreou. We concluded with a wonderful Greek dinner (and real Greek food is incredible).

Yes, this is a bit lighter than some of the previous posts from the symposium — I’m blaming it on jet lag! If you have questions or comments on any of these issues, fire away!