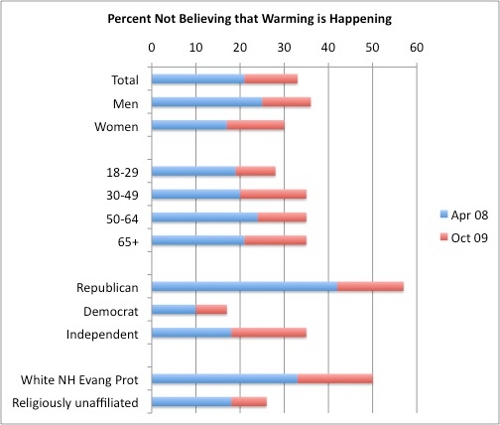 The Pew Research Center for the People & the Press released results of a major survey tracking what people believe about “Global Warming.”  It is not encouraging!  Across age, gender, race, political affiliation, and religion there have been declines in the number of people who believe that human activity is involved and increases in the number of people who don’t think it is happening.  My own demographic (white, male, 54 years old, political Independent, Evangelical Christian) is among the most skeptical, though the Baby Boom slightly bucks the trend for age.  Some friends and I are working on a strategy to challenge the Church on this issue. 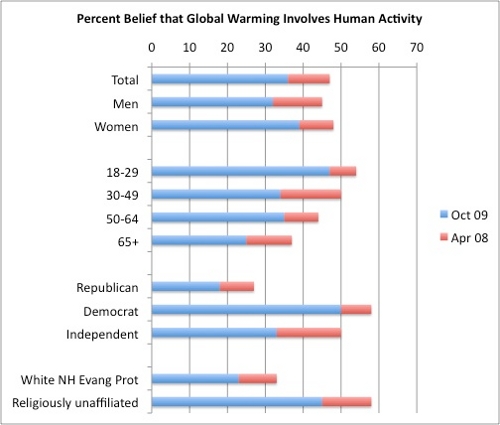 The emerging scientific evidence continues to strongly indicate that climate change models are too conservative if anything.  So why this trend? It would be appealing to cite a “FOX News” factor because their audience is the furthest along this road, but the changes in other groups suggests an even broader problem.  I’ve already argued that making this something about saving polar bears is a bad education strategy (its really about starving poor people in places like Africa).

What do you think is going on here?  Any good ideas for how to counter-act this across-the-board rejection of good science?  As I watch the way that climate change is already effecting agriculture this really concerns me.  It makes it increasingly unlikely that Congress or States will pass rational legislation in this area.  I am saddened to see most farm groups lining up to oppose a cap-and-trade even though it could potentially lead to payments to farmers who sequester carbon by using the best farming practices (no tillage, cover crops, controlled wheel traffic…).

I would be even more discouraged about this if there wasn’t an unexpected bright spot – many major food companies and multi-national technology companies are taking carbon emissions very seriously and are working on ways to reduce their “footprint” (and often that of their suppliers and customers).  I don’t think this is because they “didn’t get the memo,” but because they have taken a serious look at this threat.  They have realized that addressing it is not just the right thing to do, it can often improve their bottom line (efficiency tends to do that).

So I’m not completely depressed by this new survey, but I’m still disturbed by the trend.

You are welcome to comment on this site or you can email me at feedback.sdsavage@gmail.com