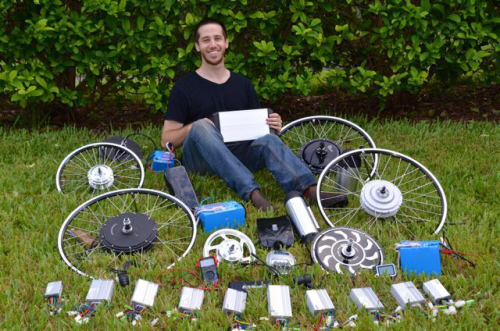 Perhaps I’m just getting old, but I’m really intrigued by the notion of an electric bike: we’re just hilly enough here in St. Louis that you have to pump hard at certain points in a ride. At this point, though, I definitely can’t afford an “off-the-rack” e-bike – they’re pretty pricey. So, as I’ve done with rocket stoves, soil blockers, and other available products, I checked into options for a diy electric bike.

Unlike some of the other lists of plans I’ve made, I couldn’t find much to recommend on this front (and, yes, this is a sponsored post, but I mean that regardless). You’d think there might be all sorts of interesting, useful information out there on converting a pedal-powered bike into one with electrical assist, but pretty much all I found was the shaky video, the way-too-vague directions,  the instructions for a kit product (for which I’d use the kit’s instructions), and the instructions that aren’t really instructions. If I were going to take the diy route for an e-bike, I’d almost have to go with Micah Toll’s Ultimate Do It Yourself Ebike Guide.

Truthfully, I haven’t read Micah’s book, so you could fairly ask “Why should I trust you on this, Jeff?” In short, Micah brings a ton of credibility to the building of an electric bike:

Up until now, you’d need to purchase an ebook or paperback version of Micah’s book, but he’s crowdfunding a hardcover version through Kickstarter. Take a look at his pitch video to learn a bit more about him, and how you can save money by buying his book through this campaign:

Credible enough? This guy’s made electric bike conversions his professional life since college… were I going to buy instructions, this would be the route I’d take.

Image credit: Learn How to Build Your Own Electric Bicycle – The Hardcover Kickstarter campaign