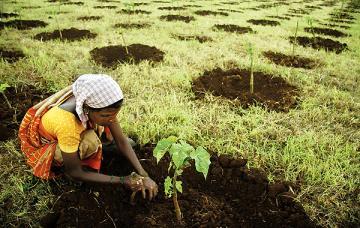 It’s official, India must work towards the use of biofuels. On September 12th the Indian government announced a new national biofuels policy: By 2017 it will aim to meet 20% of India’s diesel demand with fuel derived from plants rather than fossils.

But where will it come from? According to the National Council of Applied Economic Research, a Delhi think-tank, it means setting aside 14m hectares of land, for the growth of jatropha, a key biofuels raw material.

Although it sounds noble, the wisdom of this new policy has already come under attack. According to a special report issued by the Biofuels Digest on September 23rd, “while the new policy reiterates the government’s 2003 guideline that fuel crops are to be grown only on “waste lands”, the concept is a hazy one susceptible to interpretation and has already led to corn and soy biofuels plantations coming up in parts of the country unsuitable for tropical biofuels crops.”

Reaching Targets in The Next Few Years

India’s current target for biofuels production is somewhere between 5% and 10%. In ramping up to reach government targets by 2017, it is likely that the country might need to rely on imported biofuels. Think about the travel miles involved and the emissions generated.

One big question that keeps coming up is whether it is wise to focus on growing crops for biofuels in a land that still needs to feed its people, especially given inflated food prices. Indian farmers are notoriously known for choosing the path of least resistance. If there is more pressure to grow oilseeds or corn to derive biofuels then as long as farmers get a good price for them, then it is likely that they could neglect grain production.

It leads one to question whether the new national policy on biofuels will indeed lead to a sustainable India.

India Sets Aside 40% of Regional Wasteland for Jatropha Biodiesel Production

Salty Biodiesel Crops may Be Grown At The Beach