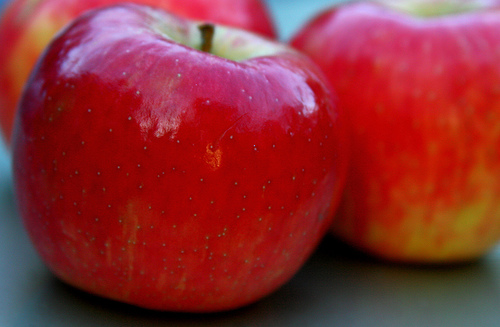 One of the best things about living in a developed country in the modern world is that we have year-around access to delicious and healthful fruits and vegetables at remarkably affordable prices.  In the last 50 years there has been a dramatic increase in the availability and diversity of produce, and many examples of significant improvement in taste.  But sadly, there are far too many people who are not taking as much advantage of all this progress as they could be.  One reason is that food companies have become so skilled at making tempting snack food and fast food options, but the other major reason is that groups like the Environmental Working Group (EWG) manage to scare people away from buying fresh produce by publishing their annual “Dirty Dozen” list.  This year, apples topped the list.  I won’t even provide a link to this bit of rubbish.  The best advice is to completely ignore it!

The Source of the Real Data Behind This

The data on which the EWG’s list depends is produced by the Agricultural Marketing Service (AMS) of the United States Department of Agriculture (USDA).  Each year the USDA scientists gathers fresh and frozen produce items from stores and other commercial outlets.  They take them into labs, wash them like you would at home, and then grind them up to test them for residues of chemical pesticides (including natural products and synthetic products).  They also test for important, known, break-down products (metabolites) of the chemicals of greatest potential concern.  The technology for doing this is extremely advanced and can detect chemicals at levels that are so low, they might be a million times below a harmful dose.

Each year USDA releases this database to the public.  It contains millions of rows of data, because it came from thousands of samples tested for hundreds of individual pesticides. Most of the rows of data say, “no detection.”  Not surprisingly, most people in the press and elsewhere only read the written summary which the USDA also provides.  The EWG also obviously only considers the written summary as they omit the valuable information which is in the raw data.  They really don’t do much “work” at all.

EWG does not gain any credibility with scientists by ignoring this information. Here is the kind of information that EWG should be considering when making their list.

1.  Which specific pesticides were detected?

To understand risk it is necessary to know two things: “what is the hazard?” and “what is the exposure?”  Different chemicals differ dramatically in their properties and in whether they are hazardous in various ways.  Pesticides themselves differ in acute toxicity by as much as 5,000-fold from a classic, 60 year-old, organophophate to the dozens of modern pesticides whose toxicity is so low that labs can’t feed enough to a rat to kill it.  But the EWG does not rank the chemicals, but rather treats every “residue detection” the same.  We know a great deal about the differences between chemicals in terms of toxicity, so omission of this information is extremely irresponsible.  It would be like telling someone that it does not matter whether you eat a teaspoon of sugar or a teaspoon of arsenic.

2. What quantity of each pesticide was detected?

The second bit of information needed to quantify “risk” is to know how much “exposure” is involved.  Electricity is an extremely hazardous thing, but we do a great job of preventing exposure.  Only a handful of people are killed or injured each year although we are surrounded with electrically powered devices (like the one you are using right now).  The USDA provides this critical bit of “exposure” information, and also how the parts per million or parts per trillion detected compares to a very conservative, “tolerance.” These levels  are based on detailed analysis after hundreds of millions of dollars worth of safety testing.  In the 2009 data that was just released, there were only 0.3% of samples where the detection was higher than the tolerance (and the tolerance is set 100 times lower than the actual level that would have an effect).  What the report actually says is, “America’s farmers are doing a remarkably responsible job of getting our food grown without putting us at any risk from pesticides.”

It is always chancy to assign motives to someone you don’t even know, but in this case I think it is pretty obvious.  This is about fundraising for an organization that has no product to sell except fear.  It would be completely legitimate for a group of States Attorneys General to file a class action lawsuit on behalf of all the people who have needlessly died from cancer and other diseases – deaths that could have been prevented if people were not scared away from eating fruits and vegetables that contain so many disease-fighting components.

On the whole, the press has failed to do it’s homework on this issue. Bottom line, ignore the report and its endless regurgitation from other sources.  Then do your friends and family a favor by explaining why the EWG’s “analysis” is so deeply flawed.  The length and quality of their lives are at stake.

Apple image from Muffet.  My Website is Applied Mythology.  My email is savage.sd@gmail.com.  You can find more detailed information at the links below: