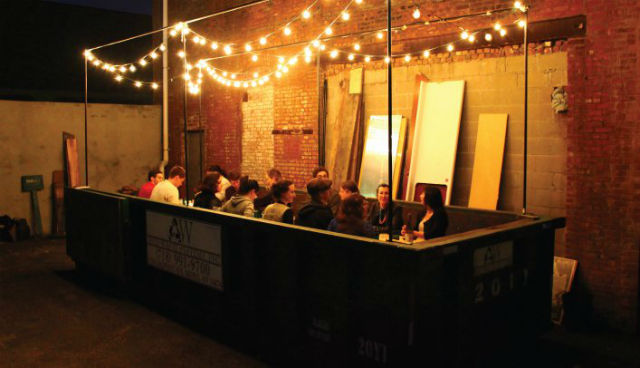 Editor’s note: As we’ve mentioned many, many times before, we’re big fans of intercepting food heading for the landfills, and doing something creative or unusual to get it eaten. That may involve an entrepreneurial venture of some kind – we’ve discovered lots of those. Or, activists may come together to “rescue” edible food for consumption, as folks at Food Not Bombs chapters do around the world. However it happens, we’re thrilled to see “waste food” being eaten by people rather than feeding the local landfill. So, when I saw this recent post at ally site We Hate to Waste, I had to share it… in full. If you’ve participated in an event similar to the Salvage Supperclub, tell us all about it in the comments…

I recently dined at the fifth “Salvage Supperclub” — literally held in a retrofitted dumpster, complete with dining table made from salvaged wood. It took up three parking spaces on South Fourth Street in the Williamsburg section of Brooklyn, NY.  Twenty of us feasted on a six-course gourmet meal orchestrated to prove a point: all kinds of food that might otherwise go to waste can be tasty and nutritious.

What is the Salvage Supperclub Anyway?

The outgrowth of a thesis project by Josh Treuhaft, a recent MFA grad from the Design for Social Innovation program at the School of Visual Arts where I teach, Salvage Supperclub are communal dining experiences to “inspire and empower everyone who cooks and eats to make the most of the food in their lives.” Josh’s mantra is quite simply: “Eat Everything”.  No food should go to waste.

“Eat Everything” by Josh Treuhaft

eat everything from josh treuhaft on Vimeo.

Josh teamed up with Celia Lam, a recent grad of NY’s Natural Gourmet Institute to create a delectable menu made from ingredients donated by food suppliers who otherwise would have rejected them as unsalable.

For starters, we savored on heirloom tomato gazpacho with carrot top and fennel frond pesto on French bread crostini with pickled kale stems (pictured). You can imagine what came next during this produce-leaning meal!

Icing on the Cake: Our Salvage SupperClub Was for a Good Cause

Thanks to mostly salvaged food and volunteer help from Celia and her team, all proceeds from the $50 admission charge and other donations, supported the Culinary Corps‘ annual ‘culanthropy’ trip to Camp Sunshine in Lake Sebago, Maine, a year-round retreat which provides respite, support, joy and hope to children with life-threatening illnesses and their immediate families.

According to Josh, “Dining inside of a dumpster has some drawbacks. But it has its benefits, too, namely that it makes for an interesting story. And that’s pretty helpful when you’re trying to spread the word and get people to pay attention to your cause.” Check out some of the great news coverage of Salvage Supperclub on Grist, the New York Daily News and CTV News.

You can find Josh Treuhaft on Twitter at @TheTreuhaft and follow his food waste movement via #SalvageSupperclub and #EatEverything.  For lots more details and images of the SalvageSupperclub I attended, feel free to check out my blog.

Bill Gordon has a Ph.D in Zoology focused on Cellular and Molecular Biology from UC Berkeley and an MBA in Finance from Wharton. Bill is an angel investor and serial entrepreneur who currently teaches entrepreneurship in the Design for Social Innovation graduate program at the School of Visual Arts in NYC. Bill was awarded a Gates Foundation Grand Challenge Exploration Grant in October 2009 for work on a novel approach to making a vaccine against malaria at biotech startup Tetragenetics. He regularly advises other early stage companies. He lives in Westport, CT.