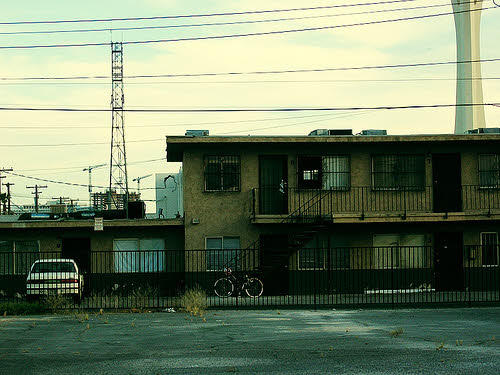 Back when I lived in Las Vegas, “downtown” meant “Fremont Street” and a cheap night out in somewhat seedy establishments. I’m guessing that’s probably not changed a whole lot… including the fact that once you get off of Fremont’s “Glitter Gultch” district, things go downhill quickly. Sure, if you’ve got business to do with the city government, you go there during the day… but you make sure your car is locked and the alarm’s set.

Just as he did with online retail, Tony Hsieh (the former CEO of Zappo’s) sees downtown Vegas a bit differently. Where many of us see blight, decay, and just plain scary, Hsieh sees potential for a vibrant mixed-use downtown area replete with coffee shops, bookstores, bars and restaurants, and all of the other amenities desired by the “Creative Class.” Hsieh’s even put a big chunk of his own money behind this vision, named the Downtown Project.

One of the elements of this project that caught my eye (thanks to a Facebook post by old buddy David Anderson) is the Project’s plans to make used shipping containers a central building material for this revitalization. Following the lead of sites like Brooklyn’s DeKalb Market (which I wrote about at Sundance) and London’s Boxpark (which I also wrote about at Sundance – sense a pattern here?), the Downtown Project plans to use shipping containers to get the business district up and running quickly and efficiently, and to also keep the space flexible.

The artist renderings are gorgeous – quite different from how I remember downtown! I can’t think of any good reason why this wouldn’t work… but perhaps you can. Let us know what you think.