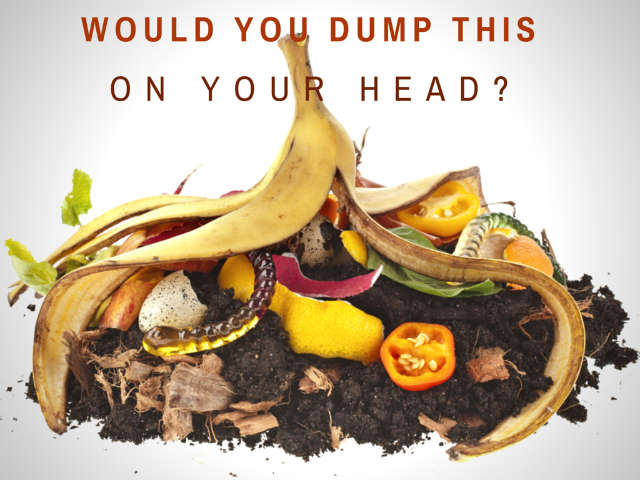 Remember the Ice Bucket Challenge? If you logged into Facebook at all last year, you know what I’m talking about: those homemade videos of people dumping buckets of ice water on themselves. The Challenge raised a ton of awareness about ALS/Lou Gehrig’s Disease (and a ton of money for the ALS Assocation). The challenge also spawned numerous imitators, including the #ScrapBucketChallenge, which asks participants to dump food scraps on their heads to raise awareness of American food waste.

Take a look at this video posted yesterday on the blog of Bon Appétit Management Company, the creator of this challenge, to get a better idea of what’s going on:

This one hasn’t taken off like the Ice Bucket Challenge – I’m guessing that’s largely because most of us are weary of videos of people dumping things on their heads (and getting challenged to do it ourselves). But I also think that, as presented, there’s not the same level of shock and appeal here. Some ideas to give this a little more “oomph”… because I’d love to see this work:

Got other ideas that’ll help this take off (besides getting Michelle Obama to do it)? Share them! I’m still debating about helping out by doing a video myself… but I could be persuaded if enough good ideas for getting this moving come in!