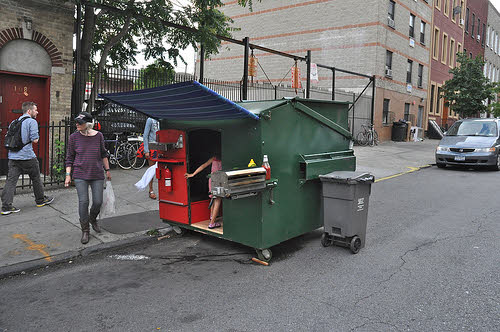 I’ve written about dumpster diving and freeganism for years, but, lately, I’ve really become fascinated by the subject (though I’m still working up the nerve for my first actual dive). I’ve fed this fascination with a couple of really active communities: reddit’s Dumpster Diving sub-reddit (which is populated largely by freegan/anarchist types) and Facebook’s Dumpster Divers/Trash Pickers United States group (which, interestingly enough, seems to be made up largely of dumpster diving moms… definitely more of a frugality-focused crowd). Both groups, regardless of ideological leanings, use their trash picking as a method for meeting their own needs/desires (either through direct consumption or “flipping” items found), and those of others (through supporting shelters and groups like Food Not Bombs).

For Oakland-based artist Gregory Kloehn, the dumpster itself seems a potent symbol, and he made a bit of a name for himself a few years ago with his Brooklyn-based “house” created out of a dumpster (which he does live in when he’s in New York – that’s it pictured above). One of Kloehn’s more recent projects, though, focuses on the materials found in dumpsters, and their usefulness. While it may sound like Kloehn has become just another dumpster diver, he uses the materials he finds to create something substantial: specifically, shelters for homeless people. Take a look at one of the finished creations:

The Homeless Homes Project takes the notion of waste central to the freegan ethic, and uses it as a way to meet basic needs of people who have difficulty doing some themselves (so, much like Food Not Bombs). The concept also values the creative freedom released when money is taken out of the construction equation. The homes created are pretty basic shelters – most aren’t much bigger than a typical sofa – but they provide a barrier to some of the elements, and are mobile. And, of course, they’re works of art in and of themselves: take a look at designboom’s gallery of photos.

No doubt, such creations aren’t an answer to homelessness; they do create a bit more comfort and safety for those living on the street, though. And they demonstrate yet again how much really useful stuff we throw away. If you’ve had a chance to see one of Kloehn’s “homes” up close, share your thoughts about his creation with us.