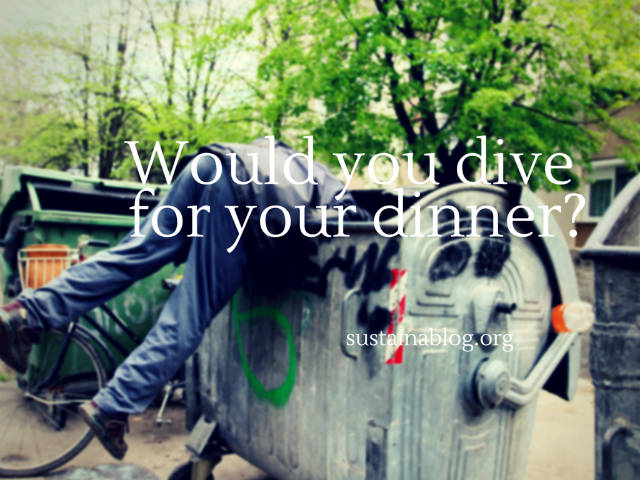 I’ve mentioned the idea of dumpster diving for food to a number of friends and family members, and tend to get similar reactions from most of them: either “ick,” or “that’s kind of low class, isn’t it?” But when I see pictures from Rob Greenfield’s “Food Waste Fiascos,” or get other reminders of the fact that we waste 40% of our food along the supply chain, it strikes me that we’re really dealing with both an economic and a moral issue: fresh, edible food just gets tossed… regularly. In that context, dumpster diving becomes an act of recovering value, as well as a means of addressing the hunger still prevalent in the US and other parts of the developed world. Activists like Greenfield, and organizations like Food not Bombs, not only insure that food doesn’t get wasted, but also highlight this obscene waste.

NPR’s “The Salt” blog featured yet another of the folks creatively bringing to light the amount of food we throw away. I read about Maximus Thaler last Spring when his short-lived project The Gleaner’s Kitchen was getting some press coverage. Thaler’s plan was a “restaurant/grocery store” stocked with nothing but dumpstered food.  His landlord, unfortunately, didn’t share his passion, and shut the Kitchen down after just a few meals. The spirit of the project lives on in a new cookbook A Curious Harvest: The Practical Art of Cooking Everything.

Like Greenfield, Thaler’s experience totally undermines the reactions I’ve received to the possibility of dumpster diving for food: he tells writer Alison Bruzek that he’s never gotten sick from eating dumpstered food, or even found rats while diving, and that while running the Gleaner’s Kitchen, all of his own meals came from dumpstered food. Furthermore, he’s collected some pretty appetizing pictures of the food that’s come out of the trash. He offers practical tips for the newbie dumpster diver, and well as the philosophical underpinnings of why he does what he does.

I found the latter interesting, and was pleased to find more of his thoughts on the topic on his website. His whole essay on dumpster diving is worth a read; I was particularly taken with the passage on how dumpster diving, for him, provides a connection to our hunter-gatherer ancestors:

The ritual of embarking at midnight into the darkness in search of food is not wholly unlike embarking on a hunting expedition, as humans have been doing for millennia. The dumpster allows me to feel like I have truly earned my sustenance – earned in a way that is distinct from the symbolic currency exchange which dominates most food acquisition today. I dig my hands into muck and slime and pull out new life. This is the promise of dumpstering – the same promise that our agricultural mythologies have been extolling since the prehistory – the promise of death and rebirth.

Yep, fascinating! Of course, there’s nothing wrong with doing it because it’s a lot cheaper than going to the grocery store (which definitely motivates many other divers)… either way, it’s good to see people getting past those initial reactions and taking advantage of this unlikely bounty.

Do you dumpster dive for food? Thinking about it? No way in hell? Wherever you stand, share your thoughts with us…