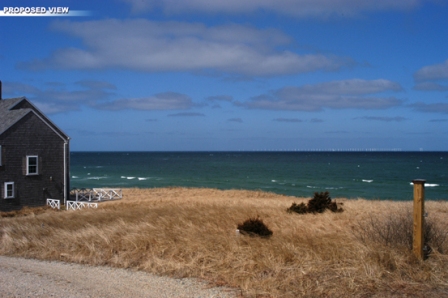 As I reported yesterday, a proposed wind farm near Cape Cod cleared a major hurdle when the US Minerals Management Service issued a favorable report in their Draft
Environmental Impact Statement.

The agency indicated that, in nearly all of the issues they studied, the project would have minimal impacts. The report did say that some birds would have “moderate” impacts, but that those problems could be mostly mitigated. Believe it or not, the only “major” impact cited in the MMS report was the view from boats. You can judge for yourself how those turbines might look by taking a look at the image above, which is a simulated view of the turbines from Nantucket created by the Cape Wind folks (link to more below). It seems to me that if the only major problem with the project is based on… …a subjective interpretation of wind turbines as aesthetically objectionable, that there should be very little standing in the way of this project. But, unfortunately, it’s not quite that easy.

“Expensive renewable energy projects with risks to safety, the environment, and the local economy like Cape Wind, fail to meet the standards for federal approval defined by Congress.” – Glenn Wattley of the Alliance to Protect Nantucket Sound

“They have done an adequate and thorough job of reviewing the potential environmental impacts with regard to avian life.” – Jack Clarke, director of public policy and government relations for Massachusetts Audubon

“At first blush, it looks like they really glossed over a lot. I feel it’s a grave error to charge ahead and make another mistake on a decision that carries so much weight as a precedent. … It’s clear the push is on … but do it where it doesn’t have an impact on the fisheries. You don’t have to displace fish and fishermen to have alternative energy. That’s a false choice.” – David Bergeron, Executive Director, Massachusetts Fisherman’s Partnership

“With public opinion demanding that our leaders provide greater energy independence and tackle climate change. I am confident that this project will move forward and provide significant benefit to citizens in this region.” – Jim Gordon, President of Cape Wind Associates.

“I am pleased to see the federal government moving forward on the review process for this important project. Publication of the draft federal environmental impact statement is a significant step for this project and indeed for renewable energy more broadly.” -Massachusetts Governor Duval Patrick