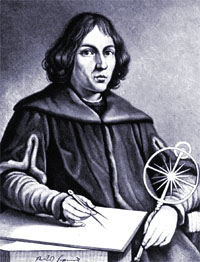 In 1543, Polish astronomer Nicolaus Copernicus published “On the Revolutions of the Celestial Spheres,” in which he challenged the view that the sun revolved around the earth, arguing instead that the earth revolved around the sun. With his new model of the solar system, he began a wide-ranging debate among scientists, theologians, and others. His alternative to the earlier Ptolemaic model, which had the earth at the center of the universe, led to a revolution in thinking, to a new worldview.

Like Ptolemy’s view of the solar system, the economists’ view is confusing efforts to understand our modern world. It has created an economy that is out of sync with the ecosystem on which it depends.

Economic theory and economic indicators do not explain how the economy is disrupting and destroying the earth’s natural systems. Economic theory does not explain why Arctic sea ice is melting. It does not explain why grasslands are turning into desert in northwestern China, why coral reefs are dying in the South Pacific, or why the Newfoundland cod fishery collapsed. Nor does it explain why we are in the early stages of the greatest extinction of plants and animals since the dinosaurs disappeared 65 million years ago. Yet economics is essential to measuring the cost to society of these excesses.

Evidence that the economy is in conflict with the earth’s natural systems can be seen in the daily news reports of collapsing fisheries, shrinking forests, eroding soils, deteriorating rangelands, expanding deserts, rising atmospheric carbon dioxide levels, falling water tables, rising temperatures, more destructive storms, melting glaciers, rising sea level, dying coral reefs, and disappearing species. These trends, which mark an increasingly stressed relationship between the economy and the earth’s ecosystem, are taking a growing economic toll. At some point, this could overwhelm the worldwide forces of progress, leading to economic decline.

These increasingly visible trends indicate that if the operation of the subsystem, the economy, is not compatible with the behavior of the larger system—the earth’s ecosystem—both will eventually suffer. Recent events in the economic and financial systems cause one to wonder if we’re beginning to see the effects of an economy outgrowing its natural base. The larger the economy becomes relative to the ecosystem, and the more it presses against the earth’s natural limits, the more destructive this incompatibility will be. The challenge for our generation is to reverse these trends before environmental deterioration leads to long-term economic decline, as it did for so many earlier civilizations.

An environmentally sustainable economy—an eco-economy—requires that the principles of ecology establish the framework for the formulation of economic policy and that economists and ecologists work together to fashion the new economy. Ecologists understand that all economic activity, indeed all life, depends on the earth’s ecosystem—the complex of individual species living together, interacting with each other and their physical habitat. These millions of species exist in an intricate balance, woven together by food chains, nutrient cycles, the hydrological cycle, and the climate system. Economists know how to translate goals into policy. Economists and ecologists working together can design and build an eco-economy, one that can sustain progress.