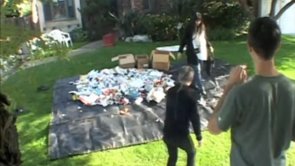 Think hardcore environmentalism requires living like a monk? Not if you ask Dave Chameides, a steadicam operator living in L.A. who collected all his trash for a year and blogged about the project.

Dave created less trash in all of 2008 than an average American family throws out in a week. And more impressively, he achieved this eco-feat while drinking beer and eating potato chips.

“I didn’t want to change the way that I was living my life,” Dave says. “If I wanted to drink beer, I wasn’t going to say, well, I can’t find a way to drink beer without creating packaging, so therefore I’m not going to. Instead, what I’m going to do is look at the packaging in beer and pick the most ‘eco-friendly’ way to do it.”

The idea behind Dave’s project was to focus on things people could do without drastically changing their entire lifestyle. “There are definitely people out there who have done similar things where they’ve cut everything out of their life,” Dave says. “A lot of people who are really really hardcore have emailed me and said, ‘You know, you can just not eat potato chips.’ Well, yeah, but I wanna eat potato chips!”

So Dave opted for bigger bags of chips versus the more wasteful one-serving bags — and cut out packaging wherever he could. Buying used items on Craigslist, composting food and paper scraps in his worm bin, and shopping at the farmers’ market — where he could even take back his egg cartons to a farmer for reuse — helped downsize Dave’s trash pile.

In the end, Dave amassed just 30.5 pounds of non-recyclable trash. That wasn’t the only stuff he piled up in his garage though — Dave decided to keep his recyclables for the year too, to show that “recycling isn’t the answer.”

“If you look at the majority of the waste that I put out there, it’s recycling,” Dave says. “That’s gonna take energy, it’s going to take resources, it’s going to take all sorts of things. I think we’ve been trained in the U.S. to think that recycling is the answer. But statistically, only 10% of everything that can be recycled is recycled.”

Plus, recycling tends to be a loosely used term, according to Dave. “Take plastic water bottles. they’re not actually recycled, they’re downcycled. They’re turned into park benches and plastic wood and things like that. Recycling is turning something back into itself. With plastic water bottles, you need relatively virgin plastic resin, so as far as the next generation of plastic bottles goes, recycling’s not doing anything.” Recycling’s still better than sending things to the landfill, but isn’t a guilt-free eco-parctice, Dave says.

Takin’ Out The Trash from Sustainable Dave on Vimeo.

See Dave display all the trash he amassed in the short video above. The trash-collecting experiment ended Dec. 31, 2008, but Dave expects most of the habits he picked up during the year to remain permanent. “I got rid of all my junk mail — I’m not going to go back to having junk mail, obviously!” Dave says. He’ll also keep taking his own bag to the farmer’s market — and even taking sugar packet wrappers home to feed to the worm composter.

And Dave’s collected trash is going to become a permanent fixture too — at the Museum of Trash in Hartford, Conn., which will put Dave’s 30.5 lbs of nonrecyclable trash on exhibit later this month. Dave’s recyclables are going to become art as well, thanks to an artist in Seattle who wants to pulverize everything then create something new out of the remains.

What are Dave’s plans for 2009? He’s working on a book called 365 Days of Solutions, teaching eco-seminars, and working at a new job as the director of sustainability at a local school. You can follow Dave’s eco-journey and get tips to craft your own at sustainabledave.org.