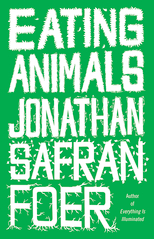 Author’s Note: A free review copy of this book was provided to me by the publisher, Little, Brown and Company.

Jonathan Safran Foer has received great critical acclaim and worldwide attention for his wring style in novels such as Everything Is Illuminated: A Novel. His most recent book, however, is non-fiction and edgy in its own way. Eating Animals is a thoroughly personal account of Foer’s confrontation with the ethics of eating animals after the birth of his son. (Editor’s note: both links above are affiliate links)

Like his other books, Foer’s Eating Animals was a national bestseller and has received great praise. My initial question after reading it, though, was, “How in the world could a book like this be a bestseller?” It seems like the last thing that would fly off the shelves, be on a book-of-the-month-club reading list, or be on the tips of tongues when friends recommend books to friends. I mean, simply put, this is the hardest, most difficult, most painful book I have ever read…

But it is also one of the most impressive, most powerful, and most important.

Foer’s researching is meticulous and well-rounded, for he draws upon the sort of sources you might expect–such as reports from animal-rights organizations–but also governmental and non-governmental organizations, personal interviews, and even industry/trade publications. Yet what makes Eating Animals most remarkable is Foer’s crisp, tight prose, his ability to weave the data into a “story” that is at once personal and provocative for readers.

Foer’s book is divided into eight chapters, each having a title that is not entirely transparent but more evocative and even metaphorical, like “Words / Meaning” for the glossary-like third chapter, and “All or Nothing or Something Else” for the early second chapter diving into the dilemma of how many, and what type of, animal products one can eat and still eat “ethically.”

As you might expect, a book like this relies heavily upon the facts of factory farming: the conditions that the animals experience; the heartless, profit-driven science and economics that turn living creatures into bio-widgets (my word); the self-imposed ignorance that consumers exhibit so that they can continue shopping, eating, and living without shame.

However, according to Foer, “A straightforward case for vegetarianism is worth writing, but it’s not what I’ve written here” (13). Though his book gets into some ugly territory and, for most, would seem like an attempt to convert the animal-eaters amongst us, it is as much an account of his personal confrontation with the ethical questions of eating in our modern, industrialized world. At the same time, it cannot help but raise moral questions for everyone who shares that world and, in one way or another, is complicit in the system of food production.

The question of eating animals is perhaps one of the most sensitive we face, too. “If and how we eat animals cuts to something deep,” Foer explains (32). “Meat is bound up with the story of who we are and who we want to be, from the book of Genesis to the latest farm bill.” Whether driven by huge corporations or personal cravings, meat/animal eating pushes biological, social, and ethical buttons simultaneously. No wonder it gets people so heated, often defensive or confrontational.

And Foer wants to, strives to push all of those buttons and make readers think, really think about what and how they eat. His is an attempt to pull down all the veils, be they market propaganda or personal rationalizations and attempts at self-deception to avoid discomfort. “Factory farming’s success depends on consumers’ nostalgic images of food production,” he says, “because these images correspond to something we respect and trust” (35). If we imagine Farmer John happily tending his cows, pigs, and chickens, then it makes it easier not to wonder about the story behind that shrink-wrapped chicken in the supermarket or the beef patty in our fast-food hamburger.

But Foer will have none of this, and so he takes readers into the dark heart of factory-farming–into the overcrowded sheds and cages of chickens, the slaughterhouses, the pig gestation crates, the assembly-line-like processing plants. Often, we face these hard facts through the numbers–of animals raised for food per year in factory farms, of increases in production/productivity by the industry, of annual profits, of resource use and pollution production…

In chapter after chapter, the heart of Foer’s book is a heart of darkness, in which we face the facts of cruelty in factory farms and the fictions that we, in part driven by the industries themselves, tell ourselves to avoid that darkness. And we cannot escape the most damning, frightening fact of all: That no matter what we tell ourselves about the agricultural industry, “At the end of the day, factory farming isn’t about feeding people; it’s about money” (243).

With all the blinders removed, and all the facts about all the animals (chickens, pigs, cows, fish) before us, we see just how bleak is the world of animal agriculture.

Other Stories about Eating Animals

Although the vast majority (around 99%) of all animals used for food today are raised in factory farms, Foer shares with us some of the other stories about humans’ relationships with, and reliance on, animals. And these are some of the most intriguing moments in Eating Animals.

Looking only at the industry centered around companion animals, itself a juggernaut of consumerism, one could see that humans have an abiding affection for non-human beings. “When surveyed,” Foer recounts, “96 percent of Americans say that animals deserve legal protection, 76 percent say that animal welfare is more important to them than low meat prices, and nearly two-thirds advocate passing not only laws but ‘strict laws’ concerning the treatment of farmed animals” (73). One finds similar numbers for environmental matters. This is a story that deserves telling, for it reminds us that we do give a hoot about animals and do believe that they should be treated fairly, humanely, respectfully…not despite, but because we use them for our own sustenance.

Oddly enough, this story is brought to the fore in Foer’s “glossary” entry for “radical”–that is, choosing to be vegetarian/vegan today is paradoxically “radical,” though it stays truer to our most basic ethical positions.

Equally radical are the stories told about different individuals who oppose factory farming and who practice its opposite, traditional animal husbandry. Thus we meet Paul Willis, a pig farmer; Frank Reese, who raises traditional/heritage breeds of turkeys; Bill Niman, the founder of Niman Ranch who got kicked out by shareholders because he refused to adopt “modern,” less-humane methods, and his vegetarian wife Nicolette; and Aaron Gross, the founder of Farm Forward and a vegan who designs humane slaughterhouses. These and countless other stories offer some glimmers of light in the factory-farmed darkness.

Foer’s ability to tell these stories, or to let them tell themselves as part of his story, is probably the aspect of Eating Animals that I most appreciated. They give one a reason to have some hope, even though each story cannot escape the ethical dilemma of factory farming. As Foer argues, these are more like exceptions to prove the rule, at best temporary opportunities to eat (more) ethically that ultimately feed the factory-farming machine instead of cutting off its fuel supply.

If most people care about animals beyond how good they taste, then how can we make sense of the way animals are actually treated in factory farms? More importantly, how can we change the story that our culture has been spinning since the early parts of the twentieth century?

Foer writes Eating Animals as a new father, and so his answer to this seems equally personal. In the final parts of his book, Foer attempts to initiate a new story for himself and for the rest of us. That is, he tries to make us see our lives, our families, our traditions, and our culture in a different way–a way that puts compassion and welfare ahead of taste, habit, and profit. He gives us glimpses of similar cultural revolutions based on moral revaluations, many of them diet-based revolutions that occurred because people changed how they ate and recognized how food intersects with so many aspects of our lives and the larger world.

Aptly enough, the end of Eating Animals is a story, Foer’s vision of his son’s first Thanksgiving. On this day when millions of turkeys are slaughtered for the ritual of eating in order (supposedly) to give thanks, Foer envisions an alternative story in which compassion conquers blind custom and new stories are told about kindness, connections, and “conscientious consumption” (266). These are not new stories so much as old stories told in new ways, traditions reformed for a changed world.

Woven together as they are, Foer’s heartbreaking facts, personal accounts of moral hand-wringing, and attempts to live an ethical life make Eating Animals a challenging book. Although his optimism may not be well founded and his stories of hope may get lost in the din of the modern market, Foer’s personal passion for finding alternatives to the cruel story we face (and take part in) everyday is evident throughout the book.

Through his powerful writing and keen ability to make facts come to life and seem disturbingly relevant for anyone, Foer creates what may be one of the most effective books in the history of animal rights. Even if it does not convert every reader to vegetarianism, Eating Animals will make an important contribution to this crucial cause by forcing its readers to think about how their choices affect the world for animals, for themselves, and for their children.

Thus, Foer leaves us with a terrible duty after laying the facts before us: “We are the ones of whom it will fairly be asked, What did you do when you learned the truth about eating animals?” (252).

Started thinking about next Spring’s garden yet? Check out our current listings of gardening equipment, including composting bins, rain barrels, and water-saving drip systems.