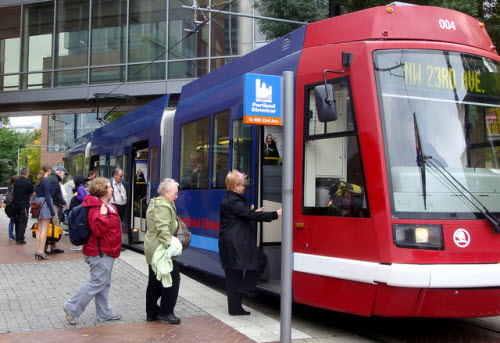 A team of 10 cities came together in Portland, Oregon for a first ever “EcoDistricts Institute” educational gathering hosted by the Portland Sustainability Institute. The cities included in the first-of-a-kind meet up were San Francisco, Vancouver B.C., Austin, Philadelphia, Boston, Cleveland, Charlotte N.C., Bellingham Washington, Mountain View California, and Guadalajara, Mexico.

What is an Eco District? It’s any neighborhood that has a strong commitment to ‘neighborhood-scale’ sustainability. Any such district develops strategies for green infrastructure, mobility, waste, water, recycling, and green energy programs.

Since the term “Eco District” is a relatively new made-up designation, many cities around the world are already developing plans that fit the bill. Some cities may call their ‘eco district’ an ‘eco village‘ or ‘innovation district’ etc. which all aim to stave off future environmental issues by ensuring sustainable practices are put in place today.

To help bring the eco district concept to the forefront of city planners minds, Portland Sustainability Institute partnered with the city of San Francisco and CH2MHill. Together they are pioneering a pilot program with 16 different cities in North America to raise awareness for neighborhood-scale sustainability efforts.

Even still, Portland does have bragging rights because of its strategic use of neighborhood-scale development in neighborhoods like the Pearl District, where they transformed old warehouses into a thriving upscale neighborhood. Other cities often look to Portland’s Streetcar as an effective tool to help increase livability and create an economic opportunity to transform ‘blighted’ buildings or city-blocks.

For the first time in world history, more people live in cities than not. Improving how people live in cities is one of the world’s biggest challenges. Portland is a leader in imagining the future of cities. Over the last 40 years, we’ve gone from grey to green. Portland is now of the few cities that has improved its economy and environment; our spirit of craft, innovation, community and originality has created a high-growth, low-carbon city. Along the way, we’ve learned how to save money and resources and do more with less. We got here through innovation, and we’re now exporting our best ideas and products to other cities aspiring to be green. – PDXinsititute.org

Can Portland, Oregon export its expertise in building green cities? One thing is for sure, if more and more cities around the world begin to adopt some of the eco district strategies, people will benefit from increased livability and environmental security.

Photograph and Article by John Tarantino who writes for TheEnvironmentalBlog.org