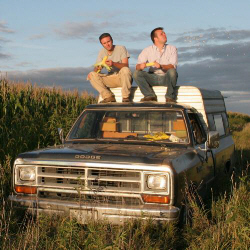 Editor’s note: We’re excited to hear that King Corn is coming to the small screen, and that its creators have a new film coming out. Thanks to our friends at Eco-Libris for sharing this post with us; it was originally published on Saturday, April 5, 2008.

Two weeks ago Eylon Israely conducted an interview with King Corn‘s Director and Producer, Aaron Woolf . Today we’ve got interesting updates on the film and its creators.

Firstly, If you haven’t seen this documentary yet, here’s your chance – King Corn airs on PBS on April 15! So mark it down in your calender.

And there’s also a new film from the creators of King Corn – The Greening of Southie. The film will have its world premiere on the Sundance Channel on Earth Day, April 22 at 9:40PM. This time, the filmmakers explore green building, and they’re focusing on the first green residential project in one of the favorite neighborhoods: South Boston, or Southie as everyone calls it. Here’s a little bit more about it:

The Greening of Southie goes behind the scenes and onto the scaffolds to follow the construction of Boston’s first green residential structure, a luxury condominium complex called the Macallan Building. Located in the city’s storied working-class neighborhood, South Boston, Macallan was conceived with the ambitious goal of securing a LEED Gold rating from the U.S. Green Building Council. Moving between the idealistic young development team, distant suppliers, and the salty union construction crew, The Greening of Southie maps each step––and misstep––on the road to move-in day.