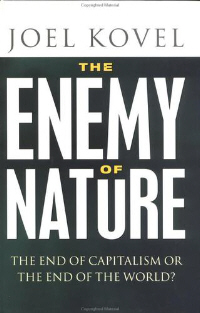 Editor’s note: Today, we’re starting a content partnership with Eco-Libris, a company that offers you the ability to “offset your reading” by planting trees for the books you buy and read. The Eco-Libris blog covers a wide range of topics related to books, publishing, and paper production, and is well worth a spot in your RSS feeds. While the book featured here is a little more radical than most of our content, we thought it might start some interesting discussion… so chime in! Today’s post from the E-L blog was written by Raz Godelnik, and published on Monday, February 11, 2007.

Today on our green books series, we’re talking radical. “Something has gone terribly wrong in the relations between humanity and nature.” Joel Kovel believes he knows what’s the reason for that. Hint? it starts with a Capital C.

Our book for today is:

The Enemy of Nature: The End of Capitalism or the End of the World?

Joel Kovel is Distinguished Professor of Social Studies at Bard College. He has written ten books, including the first edition of The Enemy of Nature which appeared in 2002, and Overcoming Zionism (2007). He has edited the journal of radical ecology, Capitalism Nature Socialism, since 2003 and has been active in Green politics, running for the US Senate in 1998, and seeking the party’s presidential nomination in 2000.

What it is about (from the publisher’s website): We live in and from nature, but the way we have evolved of doing this is about to destroy us. Capitalism and its by-products – imperialism, war, neoliberal globalization, racism, poverty and the destruction of community – are all playing a part in the destruction of our ecosystem.

Only now are we beginning to realise the depth of the crisis and the kind of transformation which will have to occur to ensure our survival. This second, thoroughly updated, edition of The Enemy of Nature speaks to this new environmental awareness. Joel Kovel argues against claims that we can achieve a better environment through the current Western ‘way of being’.

The Enemy of Nature: The End of Capitalism or the End of the World? was originally published in 2002. This is an updated and expanded edition, which bring Kovel’s arguments up to
date.

Why you should get it:
Even if you don’t agree with Kovel’s radical ideas and thoughts, I think it’s always interesting to get to know better another way of thinking, especially when it challenges the capitalistic system which most of humanity had embraced in this stage or another.

The connection between economy and environment is always intriguing and Kovel’s thoughts, such as “however capital may restructure and reform itself to secure accumulation, it is incapable of mending the ecological crisis it provokes,” definitely contribute to the debate on what the right way to reach sustainability is.

What others say about it:
“Joel Kovel has brought us a persuasive, passionate and hopeful ecosocialist manifesto. He shows how problems from toxic pollution to globalized poverty reflect the inner logic of capitalism, and extends the lessons of Marxism and other radical traditions to illuminate a path toward an ethical and ecological revolution. This book offers much food for thought to all who seek a systemic understanding of today’s social and ecological crises.” (Brian Tokar, activist and author of Redesigning Life?

and Earth for Sale

“Among the many benefits that have resulted from cessation of the Cold War is our freedom to criticize capitalism, openly and forcefully, without being labeled “communists,” or worse. Joel Kovel takes strategic advantage of this development by indicting capital’s dismal ecological record in a book that is sure to spawn lively and sensible debate.” (Mark Dowie, author and former editor of Mother Jones)

Enjoy the book, and if you’re looking for other interesting green books, you are invited to check out our green books page on our website’s green resources section.